It goes without saying that having an appreciation for humanity is critical for doctoring.

One of the areas of medicine that is most tragic is how we treat the elderly. If I could change one thing about medical care, I would make the care of the elderly more gentle. Dr Dan Matlock (@Dan_Matlock) is a friend and academic physician interested in improving decision quality. He wrote this in a comment on my recent Medscape/Cardiology post.

Somewhere in the last 100 years, we have replaced humanity with technology.Â  I actually think we have huge gains to make in bringing the humanity back to medicine.Â  A field of medicine with deep humanity andÂ amazing technology – then we’ve got something.

Where does one learn about humanity? One place is through the arts. If I was in charge of medical education, the film Amour would be required viewing. 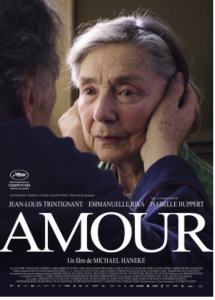 Amour is a French-language film from an Austrian filmmaker that won an Academy Award for Best Foreign-language film. It deserved it. The plot centers around the struggle of an elderly married couple after the woman suffers a stroke. It’s poignant in how it depicts the human struggle of illness and frailty.

Loss of independence and loss of dignity isn’t something that most doctors understand. You go to class and you learn about cells and physiology. Then you go to the clinic and the hospital and you learn about drugs and procedures. You see disease, but it’s harder to see the people with disease. It’s hard because you don’t see what they show in Amour.

A few years ago, my wife Staci and I (mostly Staci) helped care for a neighbor with advancing Parkinson’s disease. Watching her slow and steady decline (over many years) from a vibrant independent woman taught me a lot.

It’s a sad film, yes for sure. But it’s important for doctors and patients alike. As technology advances, and we get better at keeping our organs going, the importance of appreciating humanity only increases.