As some of you may know, theHeart.org has merged with Medscape Cardiology. This will be my first post on the new site.

Dr Donald Low was a prominent Canadian physician. When Toronto faced a deadly SARS outbreak a decade ago, Dr Low was a voice of calm and reason. His research in cell signaling and infectious disease led some to think he was Canada’s best chance for a Nobel Prize in Medicine. He did a lot of good in the service of others, right until the days before he died.

Dr. Low recorded a seven-minute video a few days before he died. The hyperlink to the video is included in my post. It’s a stirring video that brought many things to mind.

I thought about one of the main goals of an electrophysiologist–prevention of sudden cardiac death.

A twinge of anger came to me as well. His appeal for Canada to legalize physician-assisted suicide brought back memories of my response to Dr Paul McHugh’s unenlightened caustic WSJ opinion piece earlier this year.

The issue of control features prominently in Dr. Low’s appeal. He worries most about losing control at end of life. This really speaks to me. Patients need to be in control; care must be aligned with their goals.

Medical errors came to mind as well. One of the things Dr Low points out is the inability of doctors to relieve his suffering. Why does he think that? Is it perhaps because someone might think opioids were what caused his demise rather than cancer? I talked about the issue of treatment v disease. 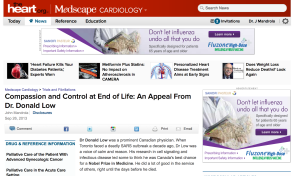 It’s not often that doctors speak so courageously and candidly. When they do, we can learn a lot.

I hope you want to read my full post: Compassion and Control at End of Life: An Appeal From Dr. Donald Low

P.S. Medscape Cardiology may require you to register with an email.