What can an interesting case of a simple infection which nearly led to sudden cardiac death teach us about health care, health care reform and our ways of knowing?

Dr Wes’ blog recently described a post from a geriatrics (specialist in the care of the elderly) doctor that highlighted the challenges of caring for the elderly in today’s medical climate.  Obviously, we all know the elderly often have multiple medical problems, take multiple medications and thus are at increased risk for drug interactions.  No matter how thorough you try to be, on completing an evaluation of a complicated elderly patient, there is always this uneasiness that something was missed.  A 22 year old with SVT cured for life with a 60 minute ablation it is not.

An 82year old women was admitted a few days prior to my visit with abdominal pain from a simple urinary tract infection (UTI).  At night she had multiple episodes of loss of consciousness and the following cardiac rhythm was recorded. 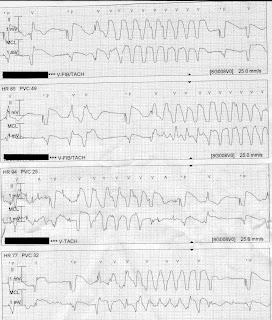 Before this recent UTI, she was living at home with her family and doing reasonably well.  I had placed a pacemaker many years before and this also was without problems.

What is the cause of this malignant rhythm?  It must be horrible; a blockage, a heart attack or some other atrocity.  No, this near death experience is from a commonly used antibiotic, Levaquin.  Come on Doc, antibiotics are safe, aren’t they?

For the most part, it is true, antibiotics are safe, but like any medicine, especially when administered to the elderly there are potential dangers.  It turns out this patient had mild kidney disease which meant the antibiotic was not cleared as well, thereby resulting in higher levels of the drug.  The antibiotic dose given was the “normal” dose which would typically be given to a younger patient with healthy kidneys.  She was also taking the anti-depressant trazodone.  Trazodone and levaquin both have effects on the same cardiac channel which controls cardiac relaxation. Heart relaxation time is termed the QT interval.  These two medicines are QT prolonging agents.  Excessive QT prolongation leads to the above pictured malignant arrhythmia.  Additionally, women are more susceptible to QT prolongation then men.

Here is a very functional elderly women who is doing well with a pacemaker and an anti-depressant who unfortunately develops a common urinary tract infection.  A simple problem for a younger healthier patient, but in the elderly, not so much. This case demonstrates a near perfect storm:  not one, but two drugs with the same cardiac effect, plus female gender and finally depressed drug clearance from kidney disease.  Just one or two of these issues would not likely have caused any adverse outcome, but all the above combined to cause a near death situation.

This particular case concluded with a positive outcome.  The treatment was to change the antibiotic to a non-QT prolonging agent (obviously) and to increase the pacing rate (increased heart rate decreases the QT interval).  The crisis was averted.  I wrote on a prescription pad to “always avoid QT prolonging medicines.”

A geriatrics specialist might have known to adjust the dose of an antibiotic in this elderly patient with a decreased ability to clear the drug.

Considering she was already on an anti-depressant drug which affects the cardiac rhythm, the use of an antibiotic without QT prolongation would have been a better choice.  This seems obvious, but Levaquin is commonly used and most often well tolerated.

A computer entry system that flags these potential interactions may have prevented this event.

Although, I knew both drugs were QT prolongers, it took just 3 minutes with a 300 dollar laptop and google to know these drugs both inhibit the same cardiac channel.  For those wondering, it is the HERG channel, which controls potassium channels.  The same channel affected in Long QT -2 patients.

On learning:  discovery is still fun.  These were indeed beautiful tracings.  A good outcome was accomplished.  I felt like a resident again- good sensations.  It is sad there are no medical students (“learners”) at this private hospital.  I could have “schooled them.”

On reform:  When our health care system is reformed, it seems obvious to me that caring for the increasingly elderly population should be emphasized.  The elderly use medicare.  Medicare reimbursement looks to be going south.  How is this an incentive?

Maybe stories like a simple infection threatening a life will help illustrate the importance of recruiting and maintaining talented care givers for our elderly patients.