It may seem a little formal to say this, but I would like to start by stating my goals for todayâ€™s post:

Intro: The adaptations of the human heart never cease to amaze me. Physical training transforms our hearts into high performance engines. Repeated sessions of interval training, combined with longer aerobic efforts, and sprinkled with adequate rest maximize our ability to keep pressure on the pedals, or run the sixth mile of the 10k at the same pace as the first, or for you swimmers, to keep getting back to the wall on the 1:15 mark.

Fitness also brings measurable changes in things we can observe. Thereâ€™s the simple stuff that we see and feel: sharper facial features, looser-fitting jeans and a lightness in oneâ€™s step. Then there is the stuff that our primary care doctor measures: lower blood pressure, lower resting heart rate and better cholesterol levels. Finally, our cardiologist might see changes in our ECG and heart measurements on Echocardiograms.

The changes in the heart that occur with exercise are sometimes called the â€œathletic heart.â€ But the amount of change that constitutes normal adaptation is hard to define. Some amount is normal, but not rarely, real cardiac abnormalities are mistakenly called athletic changes. More commonly, normal variants trigger unnecessary, costly and risky testing.

The sudden death in the athlete paradox: The mainstream media is replete with reports of athletesâ€”both young and old–that suffer sudden death. These tragedies capture headlines because the lean and fit are not expected to fall over dead. But yet, heart disease is our number one killer, and sudden death is the leading cause of heart-related death. As a cycling cardiologist, I am frequently asked about the means for preventing such tragedy. â€œHow could [insert highly-trained athletes name] death have been prevented?â€

Might an ECG have showed something? Could a painless, radiation-free, inexpensive and widely available ECG identify an at-risk patient? Could a 25$ test prevent a death?

We already know that a simple screening exam and history is inadequate, as many athletes who die suddenly had normal exams shortly before they died. It isnâ€™t that the exam missed something; itâ€™s just that many of the causes of sudden death are not findable with a stethoscope, or a checklist. 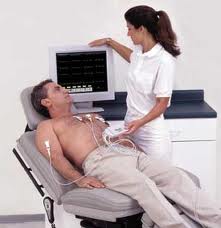 An ECG is simple but elegant. There are 12 sticky electrodes placed on the chest and body. Each one of these leads looks (records a single heartbeat’s wave of electricity) at the heart from a slightly different angle. The left arm lead looks at the heart from the left, the leg leads look from below, and the sternal leads look from the front. The 12 leads are printed on a single page and an electrical recording of the heart is painted as if it was a landscape portrait. Like an artist does with a painting, an experienced ECG reader can see many things from the 12 separate squiggles.

Quantitative things like rate, rhythm (regular or irregular), duration of contraction (QRS) and relaxation (Q-T) are easily recorded. Qualitative things can also be suspected: strain, hypertrophy (enlargement) and sometimes we say it looks really weird, which is not usually a good sign.

ECG nuance: The problem with using ECGs is that they are not clear-cut. For example, we frequently call an ECG finding â€œnon-specific,â€ meaning it might be associated with disease, or it might be â€œnormal for you.â€ Much in medicine takes skill, but most experts will agree that ECG interpretation is really hard. It takes many years of training to get the hang of it. Then it takes practice. Despite those seemingly authoritative computer readings listed on most ECGs, I am telling you that computers cannot read ECGs. Let me repeat: Computers cannot read ECGs!

Sadly, old skills like ECG reading are becoming extinct. The reasons for this are many, but two that come to mind are: there are few teachers left to teach ECG interpretation, and of course, young doctors have to learn so many other things: compliance with coding, checklists, and appropriate hand washing techniques, for example, that there is nary the time for nuanced stuff like ECGs.

Early repolarization: This week, a group of Harvard researchers reported on the ECG findings of competitive college-aged athletes. The study, Early Repolarization Pattern in Competitive Athletes, is available for free in the journal, Circulation: Arrhythmia and Electrophysiology. The researchers analyzed the ECGs and training logs of over 800 athletes in a wide variety of sportsâ€”both strength and endurance related disciplines were included. This study is relevant for athletes, because many of us have the common ECG variant, early repolarization (ERP). ERP means the pattern of heart relaxation on the ECG is accentuated. ERP can be confused with heart attack and electrolyte abnormalities.

The common thinking holds that ERP is (was) a normal finding in the young or athletic. That is, until a number of association studies (from reputable centers) have suggested that ERP may be associated with an increased risk of sudden death. When these researchers looked back at the ECGs of patients that died suddenly, they found early repolarization patterns occurred more frequently than expected. These studies scared me because my ECG shows marked early repolarization patterns. â€œAm I at increased risk for sudden death?â€

I like(d) this most recent Harvard study because they showed that an ERP pattern is not only very common in athletes, but also for the first time, they clearly demonstrated that some athletes can actually induce an early repolarization ECG pattern with an intense training program. The exercise-related ECG patterns occurred without demonstrable changes in heart size and thickness. In other words, exercise changed the electrical properties of the heart. This was not previously known. The researchers concluded this about the early repolarization pattern on the ECG of an athlete:

â€œThus, when found on an ECG â€¦ERP should not necessarily mandate further costly diagnostic testing. In addition, practitioners should recognize that ERP is a dynamic process that is more likely to be observed in healthy athletes at times of peak fitness.â€

Good. My ECG doesnâ€™t bother me so much now.

The final take-home message about ECGs in the athlete:

Itâ€™s not bad to have an ECG; it may indeed help save your life. But keep in mind that itâ€™s far more likely to be normal, or a normal variant. Before undergoing costly or risky testing, do not be afraid to ask for another opinion about an “abnormal” ECG reading.

5 replies on “CW: The ECG of an athlete”

Thanks…. I missed that one. There are a lot of us out here that appreciate the extra time it takes to maintain your blog.

About interpret the heart and skills required for that I’m quite impressed by the Swedish scientist Henschen that used stethoscope to come up with the theory that athletes could develope an enlarged heart. How many would be able to do that nowadays?

I am not yet a medical student (soon to be though) but a runner which has gotten me interested in sports cardiology. Your and L. Creswell’s (‘Athlete heart blog’) blog really provides some great information on the topic.