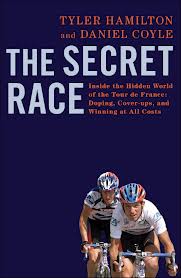 Hereâ€™s what I was learning: secrets are poison. They suck the life out of you, they steal your ability to live in the present, they build walls between you and the people you love.
Tyler Hamilton, The Secret Race

It seems frivolous at times: to be so rabid a fan that I would actually take vacation days just to watch the big mountain stages.

Itâ€™s true; when Lance was dominating the Tour de France, we would gather at a local bike shop to watch the drama unfold live. Itâ€™s hard to put into words how â€˜attachedâ€™ we bike racers were to Lanceâ€™s triumphs. At least I was.

When Outdoor Life Network first televised the Tour live, regular people saw an American sportsman doing what American sportsmen often do. Bike racers, however, saw something more. Words like â€˜unbelievableâ€™ got tossed around. Phrases like, â€œhowâ€™s that possible?â€ were heard frequently. When the entire US Postal team dominated day in and day out, some of us harbored doubts. We looked askance at the TV. Hmm?

Oh how sharp hindsight is.

Like a good cycling fan, I wasted away almost an entire weekend reading Tyler Hamiltonâ€™s The Secret Race.

From a racer’s standpoint: The accurate descriptions of cycling life gave the book credibility. From not wanting to walk with his wife (so as to save energy), to â€˜half-wheelingâ€™ Lance in training and obsessing over everything he ate, Tylerâ€™s account of life as a bike racer rings as true as true can be. The other thing about believability: the details seemed…well…just to detailed to be made-up. Tyler’s account was consistent and corroborated. You will feel what I mean after reading the book. Think aggregate.

From a medical point of view: The science behind the doping methods were astounding. I wished they had gone into more detail. One thing that surprised me: Why didnâ€™t they use EPO to get their hematocrit to above 50 immediately before they â€˜donatedâ€™ blood? This way, the donation would have brought them down to normal and they wouldnâ€™t have suffered so badly in the days after the donation.

From a human perspective: I am a fan of humans. We are so dang interesting–and flawed. For instance, why is it that we think sportsmen (or doctors or lawyers or clergy or anyone) arenâ€™t governed by the laws of human nature? I may be in the minority here, but I like my sports contested by humans, not cyborgs.

Iâ€™m glad I read the story. I came away liking Tyler even more than I did when I watched him race.

Call me gullible; I believe Tyler.

But this doesnâ€™t sour me on the sport. On the contrary, the drama of it all only enhances my interest.

Do I think cycling should strive to clean itself up? Of course it should.

I think of doping in cycling as if it were an abscess. You canâ€™t expect to treat a walled off infection with painless therapies like antibiotics. To get rid of an abscess, one must break down the wall between the infection and the body. And that hurts–but then it feels good. Accounts like Tylerâ€™s, and Johan Museeuwâ€™s, and Jonathan Vaughterâ€™s and yes, even Floyd Landisâ€™ act to lance the boil. Itâ€™s a start.

4 replies on “CW: The Secret Race — The end of magical thinking in pro cycling?”

The closest I ever get to a bike is the stationary one at the gym. And as a cancer survivor, Lance Armstrong inspired me. We would all love to believe the herculean myth that he was able to win all those races without doping agains guys who were doping. Still, that’s a bit of a stretch don’t you think? However, EPO? When I was on chemo the stuff would have me in the fetal position with bone pain for two days. Who the hell does that to themselves?

Sorry, this is off topic.

Would you, as both an EP and a competitive cyclist, kindly give us any thoughts you may have on the relationship between endurance training, lone Afib (recently persistent), sleep apnea, long standing bradycardia, and successful treatment approaches.

If willing, please assume that a hypothetical patient is generally otherwise very healthy, has a CHAD score of 1 (75+), has had say, two ten year periods of intense physical training in his early and middle life, has not actively exercised for preceding ten year period, and is untreated except for anticoagulation.

Your columns, (and your clear easy style) are much appreciated, around here!

@Lisa above- as someone who has also been on Procrit via my oncologist in the past, I can assure you there is NO pain associated with the drug. Rather, the white blood cell meds DO cause severe bone pain (Neulasta, Neupogen, etc.) Cyclists and other athletes wouldn’t find those meds beneficial to sport. Often both meds are given during the same week during treatment, so one may think that it is the red blood cell booster, but far more likely it is the white cell booster causing the pain. I previously needed Procrit for years to normalize my blood volume and keep it simply not “severely anemic,” and I’m also a very avid cyclist, and former college soccer player. The med has little to no side-effects in my experience, other than weeks later, you get far less short of breath from no longer being anemic! 🙂 That white blood cell booster can stay the hell away, however! That one will leave a person on the floor screaming, as you experienced!

Great blog Dr. John! I found it via Dr. Larry Creswell, whom I traveled to see all the way from CA. You never know who you wil reach with your blog, proof here: http://www.umc.edu/News_and_Publications/Centerview/2011-05-16-02_Cardiothoracic_surgeon_s_Internet_following_leads_to__niche_service__for_elite_athletes.aspx
and here http://www.wlbt.com/Global/story.asp?S=14720635&clienttype=printable
If LC’s team can’t help my Cat 1 friends who have arrhythmias who CA has failed, I will definitely be sending them your way! Also great post on Tyler’s book. I feel so badly for them (The cyclists villified for doping, losing everything, while L.A. flys around on a private jet, etc.) You wrote a great op piece.

Great post on The Secret Race. I finished the read over the weekend. I have to give a hat tip to Tyler for getting his story out there, and at the same time give up what little remaining respect I may have ever had for Lance.

How sad to think one has to behave this way….and I’m not talking about his doping here, I’m talking about how much negative energy he has put out there in the world in his response to all of these allegations. Lance seems to think so long as he doesn’t accept the premise of the allegations, sometimes as loud and belligerent as a 4 year old throwing a purple duck fit, then he doesn’t have to answer to them. I no longer accept the worlds premise that everything he’s done for cancer and the sport of cycling as a reasonably acceptable justification for tolerating his bad behavior.