Iâ€™ve got a good steer for you all this Wednesday.

I discovered a nifty new cycling toy. Itâ€™s called Stravaâ€”a Swedish word that translates to ‘strive.’ (Ed Note: Thanks to commenter, Bill H for the link.) 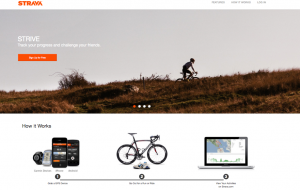 Strava isnâ€™t food though. Itâ€™s an application (or app) that uses GPS information collected from a smartphone or Garmin device to track your numbers. What numbers? Your cycling or running speed, distance, elevation gained and progress on a real map. Though this sounds like a cycling computer, Strava adds much more.

Donâ€™t worry; I wouldnâ€™t bore you with some cycling-blog babble about an over-engineered watt-meter or carbon-fibre seatpost that saves 23.2 grams. This sort of minutia appeals only to the fat-deprived elite bike racer or triathlete. My revelation applies to regular exercisers, including runners and walkers. And FTW: Strava downloads for free.

Always start with the positives:

–First off, Strava works. This is no small matter. It really does succeed in plotting your ride on a Google-like map. I donâ€™t know about you, but I love maps. Even in my hometown, I enjoy seeing where I have ridden. Obviously, Strava’s mapping technology really shines when riding out-of-town. With one click on the smartphone, your ride automatically downloads to your Strava profile. The ride info includes a near infinite amount of data. I’m drawn to the horizontal plots of elevation, which can be clicked on to show your speed, watts and position on a real map. Here’s an example of one of my more epic rides.

–Strava is accurate. Your speed, distance and elevation gain correlate well to real bike computersâ€”that cost hundreds more. Even watts can be estimated. Since Strava knows your weight, speed and elevation gain, it provides a close estimate of watts generated on climbs. This also gives you an estimate of calories burned. Obviously, watt estimations and calorie counts fall off when drafting or wind conditions come into play, but overall, it is really close to my over-engineered German watt-meter.

–Strava is social. This is its most compelling feature. Strava is its own social network. The social aspect makes it competitive. Strava plots your performance over previously defined segments. Segments are often hills, but can be descents or even flat sections. You can generate your own segment, search for already defined segments in an area, and then observe your performance versus other Strava-mates who have ridden the same segments. Strava does this automatically. It knows and records your time over every segment.

When you ride through a segment Strava records your speed and then ranks it on a leaderboard of other riders. For example, my hometown of Louisville boasts many 1-5 minute climbs. We call them knobs. Almost any significant rise in the pavement around here has been segmentized. In fact, the author covets this KOM (King of the Mountain).

Just like on Facebook and Twitter, Strava allows you to follow and be followed. It notifies you by email when another mate gives you â€˜Kudosâ€™ or knocks you off the King of the Mountain.

Like all things dealing with exercise and cycling, Strava has some downsides. Most have to do with excesses and silliness.

—Always racing up segments can quickly lead to over-training and excess inflammation. Thatâ€™s both bad and silly.

Becoming a slave to kilojoules burned or personal-best power risks squeezing the fun out of exercise. Thatâ€™s worse than bad or silly. A Mandrola axiom: never take the fun out of fun stuff.

Segments that are down hill or through series of stoplights are dangerous. Strava was recently implicated in a report of a cyclist who struck and killed a pedestrian. Apparently the cyclist was distracted by efforts to make a mark on Strava. Of course Strava isnâ€™t to blame for dumb people misapplying smart technology. Cyclists have raced around like idiots far before Strava. Iâ€™ve even heard about a doctor-cyclist who endangered his career for cycling like he had something to prove. Imagine?

Strava adds to the fun of exercising. It displays tons of cool data, which seem to stimulate the same part of your brain excited by Google Earth. Itâ€™s free and it works really well. I love its honor system: of course you could be on a scooter going up a hill or drafting on a group ride.

I can also see a larger role for Strava in the general exercising population. The social aspects of Strava might serve to motivate people who are connected in social networks. “My friends walked how far? He rode that hill that fast? Wow. I’d better get fit.” ; Iâ€™ve always believed in the benefits of exercising together. Stravaâ€™s technology gets this done whether you are together or not. We have Facebook friends, Twitterati and now perhaps, Strava-mates.

Overall, Iâ€™d give the Swedish-named app a hearty 4.5 (out of five stars.)

If you come to Louisville, you can stomp up the Sleepy Hollow Climb and see how you stack up against an aging cardiac electrophysiologist.

Have fun and pay attention friends.

P.S. For more detailed and technical information about Strava, I’d recommend this review over at the famous cycling blog, Cyclocosm.

Also a h/t to Dr Rob Orman, from ERCast.org

5 replies on “Cycling Wed: My review of Strava”

It comes from the Swedish word, â€œTo Striveâ€. Iâ€™m Swedish â€“ born in the States but lived in Sweden when I was a kid. When we were looking for a name for the company we picked out a Sweedish word describing what we wanted the company to be about. So â€œstravaâ€œ, â€œto striveâ€, it spoke to exactly what we wanted to create. A company that helps you strive and helps you achieve something you didnâ€™t think was possible.

Do you ever read fatcyclist? His wife is out defending all of her QOMs on Strava. It’s sort of humorous, but I’m glad it’s not me. Happy I am just to make it to the top in NSR.

I am glad that you posted this. I had been using Strava for a few months, but until your article and the link to the review did I understand what it would do.

This is the ride that I did Saturday. http://app.strava.com/rides/11548297
If you look at any of the segments you can clearly see that I am not using it for competition. I might have to get the premium version so that I filter it so that on my fellow geezers show.

And in learning about it Strava I found this.

It list a number of tools that you can do things like a map showing all of you rides, placing a Strava map on your webpage, and tools to look at your data.