We all know that successful bike racers are mentally strong.

But what is unknown, and hotly debated, is the role of mental toughness in an athlete’s success. (Granted, we know it isn’t their predilection to drooling.)

In sports psychology, there are the traditionalists who say that visualization of successâ€”thinking you canâ€”improves performance.

On the other hand, there are the defensive pessimists who downplay their ability and lower expectations. The proponents of such negative thinking espouse that it can actually help one perform better.  (Plus, the NY Times says it’s so.)

To both of these camps, I say your theses are hogwash.  Successful bike racing is near zero-percent mental. Cycling success is about power output and endurance, period, end of story.

In cycling, like running, swimming or any other sport without a judge in a tuxedo, there is truth. The fastest, or the strongest almost always win.

And to the dreamers who think, if only they can will themselves through more pain and suffering, I have personal evidence that such thinking is pure folly.

This past Sunday, on Halloween, I raced cyclocross. Going against the normal serious tone, I succumbed to the wishes of family and friends, to embrace the whole costume thing. (For the record, the Halloween gene bypassed me.)  But then I thought..what better way to employ defensive pessimism than to dress-up in Fred Flinstone gear for an “elite” masters bike race. 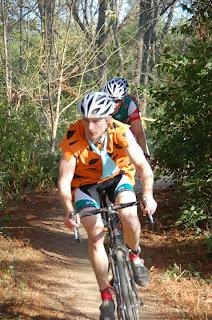 Thinking even more, I came up with the idea that employing both mental strategies in the same race would surely help bolster the effects of any “mental” component. Namely, while racing (defensively pessimistically) as Fred Flinstone, I could simultaneously think positiveâ€¦“I will drill these guys out in my costume.  Fred will take the holeshot, and then run off in the lead group,” I thought. 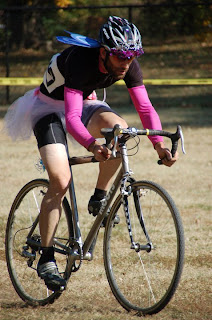 Sadly, both mental strategies failed miserably. Despite the costume and lofty visualizations, the race left me behind; not because Fred’s garb wasn’t aero, or moisture wicking, but rather, because his fitness is way off.  So bad, was Fred’s fitness, that he was felled by a fairy–a fast fairy, but a fairy nonetheless.

The obvious truth is that bike racing requires one to ride, to train, to be committed, and to be engaged.  It isn’t about thinking you are fast.

P.S. Wilma did much better than Fred.