In atrial fibrillation (AF) ablation, things are changing for the better.

How do I know times are changing?

Because I heard an EP nurse say something stunning–a sign of a new era in electrophysiology. Recently, during an incredibly difficult PVC ablation, she whispered cautiously to herself, “I’d rather be doing an AF ablation.”

The implication was that AF ablation is no longer the most difficult procedure we do.

A close friend called me last week.  She asked if I would see a middle-aged friend of hers who has recently undergone three cardioversions for AF.

These repeated ‘flails’ are occurring in a nearby (non-rural) hospital–one without an “AF-doctor” or EP lab.  (Based on its marketing presence, this hospital does not appear to be cash-poor.)

“Of course, have them call for an appointment.”

So, yes, even though it has only been six months since my last AF ablation update, it seems a new progress report is in order.  Perhaps, social media can help disseminate the message that AF therapeutics are advancing rapidly.  This, so patients are more likely to get up-to-date treatment recommendations.

(If I had medical students, residents, fellows and a foundation-supported abstract writer, I could cull our data and easily get an abstract typed up by the HRS deadline next month. But since none of those entities exist in the real world, said update will have to be a blog-post with un-peer-reviewed observations.)

The big news is: AF ablation has become substantially easier.

In the not-that-remote past (months to years), AF-ablation took 4-5 hours.  It was hard on the staff, the doctor and the patient.  Currently, however, in our hospital the average procedure times are a lot less.  De novo paroxysmal AF cases and re-do cases are done in a couple of hours; persistent and permanent AF cases still require 3-4 hours.

What has changed to make AF ablation easier? 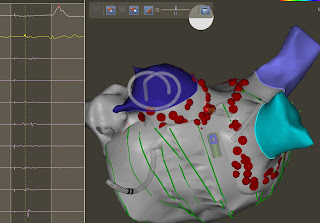 First, expensive technology has made life easier. Earlier this year, I wrote about the delivery of a new 3-D mapping system. Now, many cases later, this GPS-like catheter navigation system has proven invaluable. Although not a robot, CARTO-3, made by Johnson and Johnson, reliably shows us our catheters, creates a 3D shell of the critical left atrial structures, and most importantly, it reliably accomplishes all this in minutes.

Within minutes of gaining access to the left atrium, we are off and burningâ€”creating electrical lines of block. In most cases the AF drivers originate in Maine, Florida, Seattle and San Diegoâ€”the pulmonary veins. Because of JNJ’s novel 3D mapping systems, these lines are made with more precision and less X-ray time. X-ray times that in the past approached an hour, are now rarely above 30 minutes and sometimes even under 15 minutes.

The second reason why AF ablation is easier involves our sedation technique. All of the AF-ablators at our hospital routinely use general anesthesia. Having a patient immobile and asleep (with controlled respirations) has made creating “lines with dots” much easier.  Gone are the days when a patient’s shoulder wiggle moved the entire map, or deep breaths from deep sedation caused catheter instability.  (To be fair, there are anesthesia naysayers–albeit fewer in number–who point out that an asleep patient cannot give feedback on the pain associated with left atrial burns near the esophagus. This is true, but now we know the exact location of the esophagus (in relation to our ablating catheter), and thus appropriate esophagus-sparing strategies are employed.)

The third reason why AF ablation has become easier is simple and elegant: because we are doing lots more–experience. At our hospital, a second EP lab was opened a few months ago, and as a result, two teams can work simultaneously.  The days of the sole ablation lab being tied up all day are history.  And it’s not just the doctors’ experience that matters, it’s also the experience of the entire team.  AF ablation requires a multi-disciplinary team of nurses, radiology-technicians, anesthesia professionals and an EP doctor.

If my colleague and I had had the time, our abstract would have been entitled something along these lines: Advances in AF-ablation…in the non-foundation-supported (real) world.

In comparing our current AF ablation experience to our prior pre-general anesthesia and pre-CARTO-3 experience, our abstract would have reported shorter procedure times, less x-ray exposure, higher patient satisfaction, lower complications and improved success rates.  Additionally, we would have also reported that our ablation population has expanded to include more challenging cases of persistent and permanent AF.  Bolstered by useful technology, collegial support, and increased experience, we can now–like our ablation pioneers in Bordeaux have shown us–watch AF slow, organize and terminate during RF ablation.

All this said, in treating AF, left atrial ablation is still a very large hammer. Going under general anesthesia for hours and having numerous burns placed in the left atrium (the arterial circulation) is not for the light-hearted.  Though the treasure is rich: an AF-free life–the journey is still very much a journey.

Although AF ablation has improved greatly, things look even better for the future. Cryo-ablation techniques may help, as may circular catheters that can deliver RF energy in lines rather than dots.  Our newest pharmacologic darling, dabigatran, may also prove to be a worthy stroke prevention adjunct.

That’s the purpose here.  Not an abstract.