After reading this Washington Post story on the complexity of AF ablation decisions, I wrote, and wrote, and it just didn’t come together well. Â Not well enough to do the topic of AF ablation justice. Â Then this thoughtful email came.

My question: How does a patient have even the faintest idea whose advice is better for him/her individually? The only solution I can think of is to somehow have complete trust in my physician, his/her knowledge of a-fib, understanding of my circumstances, etc., etc. That’s all but impossible in light of the way medicine is delivered today.

So, short of complete trust in a physician, how does a patient weigh and measure the various factors to come up with a reasoned decision? Is there a checklist of factors to match against each other? I’m thinking of stuff like age (in what circumstances is sooner NOT better than later?), AF’s progressive nature, risk of stroke, degree of stretch damage, ablation success rate, waiting for new, possibly more successful treatments, heart rate control as a measure of success w/ medication, paroxysmal vs. persistent, the list goes on. Are some factors so compelling that you would routinely recommend one course or the other?

So, I will try again, attempting to clarify my thoughts on AF ablation, as an answer to the above questions.

Atrial fibrillation treatment could not be more complicated. Â AF affects a wide variety of patients, in a myriad of ways, ranging from asymptomatic to incapacitating. Â AF can be intermittent, persistent and permanent, and success in ablation parallels this continuum. Stroke risk with AF is determined by the 6 point CHADS score, where a point is assigned for Congestive heart failure, High blood pressure, Age>75, Diabetes, and two points for a previous history of Stroke. Â A higher score implies a greater stroke risk, and a score above 2 clearly indicates benefit to the blood thinner, warfarin. Â Read more here.

In the lower risk AF patient, the real dilemma in choosing AF ablation is that its complications can be catastrophic while the disease is rarely so.Â “AF is not a life-threatening disease, don’t make it one,” is advice I received years ago, from a squisher, no less. Â However, not only can AF increase the risk of heart failure and stroke, but it often markedly degrades one’s quality of life. Â Even patients with seemingly asymptomatic AF score lower than their sinus rhythm peers on quality of life surveys.

Consider also that AF drugs are rarely effective in the long-term. Â Even when drugs are partially effective, the side effects are often worse than the AF symptoms themselves. Fatigue, shortness of breath, and lower exercise capacity are both symptoms of AF and the most common side effects from rhythm drugs. Moreover, not only are AF drugs associated with nuisance side effects, many have significant dangers, including QT-prolongation, which enhance the propensity to more malignant ventricular arrhythmias.

AF ablation encompasses a variety of techniques, but most commonly involves using a series of isolated radio-frequency lesions (burns) to isolate quadrants of the left atrium. Using the image of the United States map as the left atrium, consider the four pulmonary vein areas as Maine, Florida, Seattle and LA. Â Ablation aims to isolate these problem areas by creating lines of electrical block with dot-like burns. Â It takes many dots to create a singular line, and if AF originates from Kansas, our lines will have no effect. 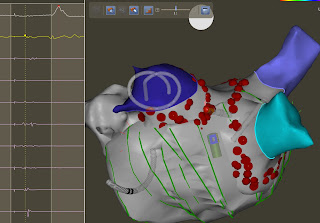 Early reports of near 90% AF ablation success rates were clearly exaggerated. The widely accepted present-day rate of ablation success is 60-80%. Â Many patients require two procedures because our electrical lines of block are frequently impermanent. Although the complications of AF ablation are infrequent (around 1-5%, depending on who you ask), they are very serious and frequently life-changers:

AF symposia go on for days, so it is impossible to capture the essence of this incredibly diverse disease with the many multitudes of different treatment strategies in a single blog post. Â The progress of medical innovation knows no better example than the therapy of AF. Â And the target is moving, as the landscape will change as new treatments emerge. No doubt, success in navigating through the decision of whether to apply aggressive treatment to a non-life threatening, but highly debilitating disease, will best be accomplished by skillful communication between an educated patient and an experienced clinician.

As the incidence of AF marches higher, hopefully, in the future, there will be incentive for one to invest eleven years of post-graduate education to learn such a trade, and that compensation for the skills required to perform such a complex procedure will be commensurate with the task.
JMM

Excellent post, thank you for taking the time to write that much. Is there a definition of "long term" when you say the AF drugs are not effective long term? Would that be months, years or decades; or is that one of those personalized not predictable parameters?

Great read Dr John. As a long term sufferer, I find that much of what you said rings true. I made my decision long ago that if the AF became too intrusive a part of my life, and that after thoughtful discussion with my Cardiologist and EP I would have the procedure done. Which I did in August of last year.

What are your thoughts on the use of supplementation, such as magnesium and potassium following an ablation? Pro, Con or indifferent?

This is exactly the information I've been looking for ever since I was diagnosed with paroxysmal afib over a year ago. I've been to three different EPs (actually four counting the stand-in for one who went on maternity leave) and nobody came close to offering any perspective on the issues you discuss here. Thank you for taking the time to put this together.

Vince – IMHO it is very important that you educate yourself on your condition as much as you can. I was fortunate in having many physician friends as well as a PCP, Cardiologist and eventually an EP that were on top of their game. Throughout my time with AFib, I also had 3 fellow friends that were athletes that were also dealing with afib at the same time I was. We all would compare notes and theories on particular triggers or ways to prevent having attacks. one along with myself had successful ablation, 1 controls his with supplementation (afib free for over 6 years) and the other control's his with diet and meditation. If you are younger and active you may find it harder to find Doctors that are more familiar with your specific needs but believe me they are out there.

"Long-term" varies a great deal, as does nearly everything about AF. I mean more than a year or two, although a small number of patients do indeed remain symptom-free for years. However, in these drug "success stories," I often wonder whether it is the drug's effectiveness or the fickle nature of AF?

It is true that I occasionally see a patient with fewer palpitations while taking magnesium, and endurance athletes are surely at risk for electrolyte depletion, but the truth is not known. It is clearly true though, there are many entrepreneurs willing to sell one potion or another in the name of heart health.

Thanks for the comments…

John,
Found your website very helpful.
Just this morning I was introduced to AF Ablation. I am low risk and my doctor suggested refering me to an EP with a view to getting AF ablation. But left it for me to consider.
I am in the UK. Do you know of any EPs here and how do our success rates compare? Do you have any UK infomation on this?

What is the back-to-normal time like from ablation in the case of people who (aside from AFIB) don’t have any health restrictions/limitations? Aside from a day or two in the hospital and maybe taking it easy for a couple of days after that, when generally can people resume normal activities….spinning class for example…or air travel?

Enormously helpful blog and very well-written…but this is very much an elective procedure and it’s almost impossible to feel comfortable that I know enough to make the right decision….especially when the only benefit is symptom relief and when symptoms on the whole are occasionally very annoying but not horrible.

Most people that have AF ablation are down for a few days. No cycling for about 5 days.

I ask my patients not to travel very far for 2-3 weeks after the procedure.

You hit the nail on the head about symptom relief and the size of the procedure. This incongruity is something I struggle with all the time. For symptomatic AF patients whose lives are rendered unlivable, ablation makes perfect sense. Likewise, for those AF patients without symptoms, not doing the procedure is an easy decision. The problem is that most patients fall somewhere in the middle of these two obvious extremes.

Thanks for kind words.