On a stunningly beautiful Autumn evening with the sun setting over Seneca Park, a number of Darryl’s friends and family gathered near the Cannons Lane/Pee Wee Reese intersection for a memorial tree planting. Under the leadership of my friend and teammate, Glenn Homza, a swamp white oak was planted in Darryl’s honor. 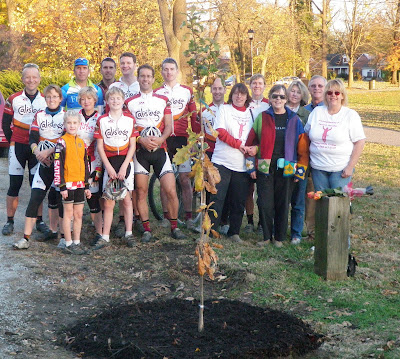 Darryl Benefiel was killed by an inattentive motorist. He was riding his bike down a steep hill when a car turned in front of him. In an instant our friend Darryl was gone. This tragedy could happen to any of us, at any time.

Words are not enough, especially from such a novice as I. Here goes…
A majestic swamp white oak is appropriate for Darryl. As Staci said this evening, “Darryl was an oak type of a guy.” This is true. The physical Darryl was tall, solid, sturdy and oak like. One of those dudes who could pull into a head wind forever.

Darryl was in the “club,” that is, the club of bike racers. Those who turn down brownies at lunch, those who train, who read about training and who live the life of a bike racer. Those who actually show up, pin numbers on, click in, and expose themselves for the thrill of the race. Darryl always showed up. He raced aggressively and selflessly. One of those guys actually working on the front. I recall being in crits in the drops, blurry eyed thinking who is up there doing this? Yes, it was Darryl up there drilling it. Respect.

Far more important though, was Darryl’s spirit. The grin, the warmth, the fun lovingingness all were Darryl. I knew of no one that did not like Darryl. Simply stated, “a good dude.” Darryl was a fixture on the park loop. It was easy to ride with him. You knew he was in a good place and felt comfortable riding along. You got the feeling Darryl was a lover of life.

Here is Darryl enjoying the outdoors… 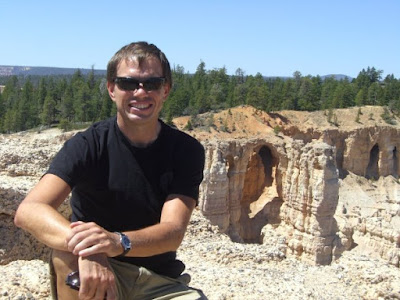 Us Calistoga guys liked him enough to put him on the team. We knew of Darryl’s racing ability and wattage, although, generating watts is the easy part of being on a racing team. Far more challenging is fitting in with the boys. These are not normal boys-racer boys are inherently a self-absorbed egocentric bunch. Darryl’s thick skin and self worth would have served him well on our team. He had that wonderful trait of being comfortable in his own skin. He moved away to Tokyo (Japan) and then to Orange county California before he actually raced with us. We knew he was still plugged in to Louisville, as he would often post to purplerides on the magnificence of riding in the southern California weather. A lover of life.
Here is Darryl in our old kit… 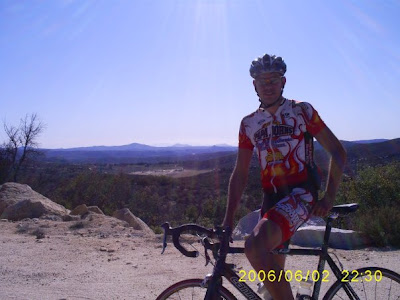 Here’s to hope… I hope that little swamp white oak grows to a majestic stature. I hope that, as folks ride by, they will think of it as “Darryl’s tree.” A reminder of Darryl and his life loving spirit. I hope “Darryl’s tree” will evolve into a meeting place for group rides in the years to come.
As I ride that familiar park loop, I will gaze to the right as I approach Cannons Lane and think of Darryl and root for that tree to flourish.
Grow, little swamp white oak, grow!
Darryl, may we meet again. Rest in peace, friend.
JMM

2 replies on “Darrylâ€™s treeâ€¦ A fitting memorial to a lost friend.”

Perfect recap of a special evening for a very special guy.

Nice sentiments Dr. John. Sorry I wasn't able to be there. Glad to know Darryl is still remembered for what a great person he was. Thanks, Jamie Benefiel