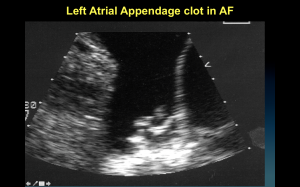 Why does being female give you an automatic point on CHADS2-VASc?  I keep seeing it, but I don’t see why that is.