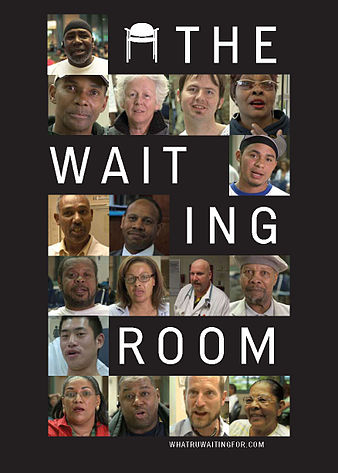 Last night, Staci and I watched the award-wining documentary, The Waiting Room.  Here is an intro from the website:

The Waiting Room is a character-driven documentary film that uses extraordinary access to go behind the doors of an American public hospital struggling to care for a community of largely uninsured patients. The film â€“ using a blend of cinema veritÃ© and charactersâ€™ voiceover â€“ offers a raw, intimate, and even uplifting look at how patients, staff and caregivers each cope with disease, bureaucracy and hard choices.

The film touched us both. More than once, as we sat together on a couch watching a high-definition TV, a poignant scene made us look at each other–as if to say: wow, we are lucky cats. We had families that cared for and loved us. By sheer luck of the cosmos, we were both born with gifts that keep us out of safety-net emergency rooms. You feel grateful. A good sensation indeed.

The filmmakers did something special. They were patient. The camera lens would focus on a person, and somehow, the sense of anguish, the despair, comes through. Just from their faces. “A month to see the pain doctor. Really?  I suffer all day and all night.” It’s moving. These people are suffering. Life is hard.

The thing about humans is that we seem able to rise to challenges. The goodness of people in that ER comes off as a partial antidote against the despair. People are trying to help people. In this way, the film uplifts. I was drawn to the intake secretary, a warm genuine African-American women in bright pink reading glasses. At one point she said to a distressed person who had just checked in and was asking about the long wait time: “Look at all those beautiful people you get to be with.”  I’ve worked in places like that ER; I suspect this women behaves the same kind way regardless of the camera.

Especially accurate, and poignant, were the scenes depicting the brutally candid triage decisions required from the bed-control person. “This one is more viable; let’s get him upstairs first.” When you see people working this hard to help others, you feel optimistic about humanity.

Finally, for those who care about society and health care policy, The Waiting Room gives one pause. You think hard about issues like equality, justice and compassion. What does it say about us as a society that we allow this sort of inequality? Pope Francis is doing a lot to focus our attention on how we treat the lesser of us. That’s good because when you watch this film, you want America to do better.

At least the thought of having true universal care–a right, if you will–pops into your head. It’s fantasy to think that the poor of this country get anything close to the same sort of care delivered in my hospital–and probably yours. You worry that healthcare reform, in its need to cut costs, will only make things worse for these folks. Are we okay with that?

Take a look and see what you think.