For the prevention of stroke in atrial fibrillation, the novel anticoagulant drugs dabigatran (Pradaxa, Boehringer Ingelheim), rivaroxaban (Xarelto, Bayer Pharma/Janssen Pharmaceuticals), apixaban (Eliquis, Pfizer/Bristol-Myers Squibb), and edoxaban (Lixiana, Daiichi-Sankyo) have been sold as both superior and more convenient than warfarin.

But is this true? More than 60,000 patients have been enrolled in randomized controlled clinical trials. Recently, two meta-analyses (studies that combine trials) have been published. That’s a bunch of data. 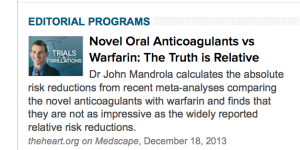 I had originally set out to explain how these meta-analyses had once and for all demonstrated the drugs’ superior safety and efficacy compared with warfarin. I wanted to know the details. The raw data. In the process of truth-seeking, I made a discovery that had me running around like Archimedes.

The column is up over at Medscape Cardiology. The title of the post is Novel Oral Anticoagulants vs Warfarin: The Truth is Relative.

Medscape asks you to register with an email. I think it’s worth putting up with these barriers. Not just for my work, but for the superb reporting and other editorial content. Of course, I am biased.