A general rule about writing a story is to lead with the important stuff. I’ve reviewed each of my ESC2013 updates, and as it turns out, each day I have led with the folly. Sorry about that. I’m going to continue the trend. If you had a blog, you could do this too. Before I’m done, I’ll tell you about some of the serious work that accomplished today. First the fun.

You have to know about the morning here at the eco-friendly Amadi Park Hotel. It’s an amazing place, situated in a beautiful neighborhood.Â  On the website, they claim to serve a very tasty and honest Dutch breakfast. They do. Here’s proof. 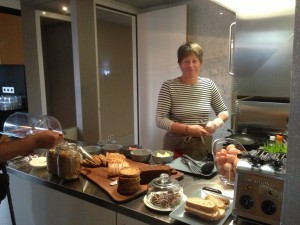 After an honest breakfast, I went to head out on the bike to the congress. The problem was I had lost the keys to the bike lock. Damn it. I searched and searched and even thought about my grandmother, who used to help me find lost items. It turns out I had left them in the Mexican restaurant the night before. Oh well, the over-crowded Amsterdam tram brought back memories of the New York subway–only it was a tad more civilized.

The day at the Congress was consumed with news about cycling, CRT (Cardiac Resynchronization Therapy) defibrillators and updates on Rhythmology.

One more personal note before I get to the heart news. I met up with an old friend from Leipzig. Dr. Andreas Muessigbrodt is an electrophysiologist who works in one of the world’s leading centers for electrophysiology. He’s also a former German triathlon champion. We originally met through social media, but now have become real world acquaintances. Andreas said something today about social media that struck me as worth jotting down in words.

He remarked on how social media was only a tool to help connect people. It got us connected. Ultimately, though, for a true connection to be made, humans needed to interact in person. This connection could never be replaced by a device or computer. Not even an Apple product. (He didn’t say that, I just thought it up as I typed.)

It’s striking how similar we feel about medicine. We both enjoy electrophysiology, but are also intensely curious about Sport’s cardiology.

Andreas isn’t the first person, I met through the blog, heck, the reason I am here in Amsterdam in the first place is because of a blog. That’s how I met theHeart.org team. On more than one occasion around here, I have daydreamed to myself that this all got started with writing race reports for PapaJohns cycling team.

Okay, sorry, I’m running amok again. Speaking of Sport’s cardiology, a monster study was released today on the longevity of former Tour cyclists. Researchers from France studied the records of 786 French cyclists who had raced in one Tour, dating all the way back to 1947. They then compared death rates and causes of death to an age-matched group of contemporary French men. The results were striking. They tell some things, but many questions remain unanswered. I hope you want to read my take. It’s up now over at theHeart.org.

The title of the post is: Inflamed endurance athletes should take no comfort in Tour de France cycling study

There’s an additional facet of the Tour coverage I have to tell you about. For the first time ever, I was asked by a prestigious reporter to comment on a trial as an expert commentator. Here’s the story in which I was quoted.

A more clinically relevant study on implantable defibrillator therapy came out today. Specifically, the device is called CRT (Cardiac Resynchronization Therapy). They are a special form an ICD which contains three leads, right atrium, right ventricle and left ventricle–via the coronary sinus. CRT devices work as pacemakers that resynchronize the heart. A proportion of patients with heart failure also have delayed activation of the left ventricle, usually due to a left bundle branch block. If there is sufficient delay in activation and contraction (two different things), CRT device may improve heart output. The key factor in whether a patient will respond to a CRT is the degree of delay. There is a simple way to measure the LV delay (ECG) and then there are complicated ways (Echo).

The EchoCRT study, released today and also published in the NEJM, showed that patients without sufficient delay (QRS duration of 130 msec) did no better with CRT. (Steve Stiles has the coverage on theHeart.org) Most important, more patients in the CRT arm died. There looked to be a significant signal for harm. This was big news. A device that can be enormously helpful in some is harmful in others. Patient selection is key. And for the win: the simple, humble, inexpensive 12-lead ECG predicted benefit better than any fancy measures from echocardiography. So good.

I also attended a press conference today in which four abstracts were presented. I made some notes, and look for a future post over at THO.

As always, we finished the night with a nice dinner with the team, tonight at an Italian cafe. 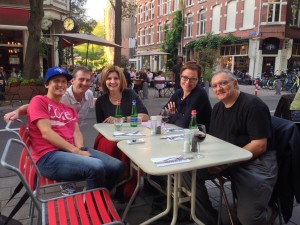 This was the view immediately to my left at dinner. 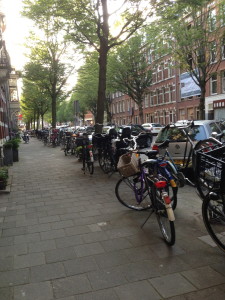 Tomorrow, the congress ends at noon. I have plans to ride in the dunes with a friend of a friend from Louisville. I have to ride the Dutch bike to the Central station, then find the train to Haarlam, then walk 5 minutes to the friend’s house, then take a car to his home and get on the bikes. Given that I couldn’t find the keys to my bike lock this morning, this seems like an Ironman-esque set of instructions. Oh, how I want to have a ride in the countryside.