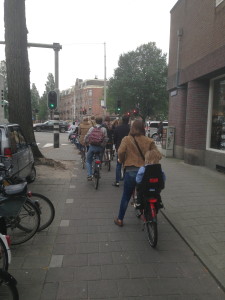 Okay, I’m getting the hang of this. The Monday morning and evening commute in Amsterdam is something special. You talk about focus. It requires laser-like focus. You’ve got bikes, narrow lanes, buses, trams, pedestrians and tourists. Still though, traveling 6k by bike took 15 minutes; a cab from the convention center, more than 30. I was coasting and still passing standing cars.

I wasn’t the only cardiologist who had figured out the transportation.

And the Dutch people look perfect. Do they even eat? Tall, Nordic-like, pleasant appearing, unflappable, all these come to mind when you ride here. I think the Dutch people may be prettier than Californians.

Here’s a short video from yesterday. You can see what I speak of.

The temperature too. Now I understand what the young people meant about being able to ride in dress clothes. You can. I did. Actually, with wool pants, a button dollar collar shirt and dress shoes, I was under-dressed compared to some.

One more thing about Amsterdam. It’s really dangerous to text and walk. I almost meandering into the way of this thundering herd. The Sporza-sounding voices alerted me seconds before a collision. 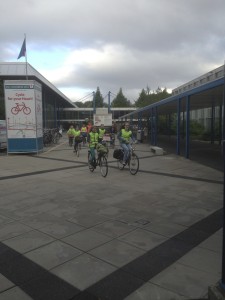 Now to the work.

Yes, this is serious work. It says on the top of the blog that I am a learner. I spent most of yesterday leaning about AF ablation. My take of the aptly named DECAAF trial is now posted on theHeart.org page. I sense a change coming in the way we think about AF ablation. Not this week or next, but soon.

Another controversial trial released yesterday looked at preventative coronary stenting. And no, that’s not a typo. The PRAMI trial, covered nicely by Michael O’Riordan from theHeart.org, showed that stenting open non-culprit blockages at the time of a heart attack improved outcomes. This goes against current thinking, which held that it was best to open only the blocked vessel causing the heart attack, and then get out. This study has faced a lot of criticism, mainly because it goes against everything we know about vulnerable plaques and atherosclerosis. Plus, the 64% reduction in outcomes seems very high. Stay tuned on this one.

Today, I spent the morning at multiple sessions. One was on the role of high-intensity training as an exercise prescription. Yeah, that will work in Kentucky. The second touched on molecular biology’s role in atrial fibrillation. Award-winning, Italian-turned-British, woman scientist, Barbara Casadei 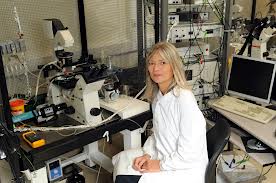 summarized her work with reactive oxygen species, NO, inflammation, and statins. I like molecular biology but this one was over my head a bit. I voice-memo-ed it for possible use later.

Then I went to a session on screening athletes for sudden death. I was supposed to see a friend from Leipzig speak about ECHO screening, but they changed the line-up posted in the book, and I ended up hearing a spirited debate on ECG screening. I’ve heard this story before.

Finally, I went to the poster sessions and got a blog topic for the day.

It has to do with the management of this: (Image taken with permission from the Life In the Fast Lane ER blog.)

The reflex therapy treatment for this was a pacemaker and rhythm drugs. There is a better way to manage it in 2013. My post on the matter, including a neatly done study will come up soon atTheHeart.org.

I’m going to give you a closing tip: Cyclists, triathletes and endurance athlete will want to pay attention to tomorrow’s ESC coverage.

THANKS for the update on the conference John – and the provocative column in theHeart.org page about the DECAAF trial and atrial fibrosis vs pulmonary veins as the ablation target. Sounds like there is hope for even higher “cure rates” for some AFib patients (if you can eliminate enough of the fibrosis). I also appreciate the brief video from Amsterdam – lots of fit folks in that wonderful city!

Could you explain what Atrial Fibrosis is? I don’t recall ever discussing the topic with my EP.