I thought this was interesting:

Six-placed Tour finisher Haimar Zubeldia, who rides for the US-based RadioShack/Nissan/Trek team, disclosed that he sat out for three months earlier this season for “persistent atrial fibrillation.” 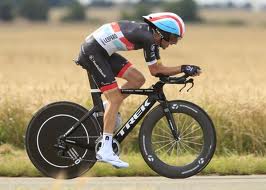 As reported by Cyclingnews.com, Mr Zubeldia said this in his statement:

â€œI had four weeks of complete rest and treatment.â€

Fortunately, â€œeverything went well,â€ and he thanked his doctor, family, friends and team, and now â€œI can enjoy cycling like never before.â€

He said that his team â€œwas aware of my situation at all times,â€ but the same can’t be said of the public. â€œSome of you asked me then why I did not race during that time and I answered that I had a hamstring injury … I could not say anything else and I hope you understand.â€

It’s not known what kind of procedure he had, if any.

This story has many important messages:

To endurance athletes... Listen carefully: Mr. Zubeldia stayed out of major competition for three months. In other words, he rested, so that his body and heart could heal. Secondly, and perhaps even more striking, is how well his body reacted to prolonged rest. The man misses almost half of his pre-Tour preparation, yet he finishes in the top-ten of the biggest race in the world. He obviously did not lose much fitness. The idea that the human body performs better with adequate recovery–both on the macro (season) and micro (weekly) levels–cannot be stressed enough. Be kind to your body; give it adequate rest.

To AF patients: Remember, AF is not a death sentence. The disease requires attention and sometimes treatment, but it often ends up well. You may not be able to ride like a Tour cyclist, but you will likely ride or run or swim or dance again.

To doctors: Though AF specialists have a long way to go before we can use the word ‘cure’, patients who get to us can enjoy the benefits of many new treatment options. Gone should be the days where AF treatment is worse than the disease.

“Gone should be the days where AF treatment is worse than the disease.”

Those days aren’t that far away. Six months for me. I will see my cardiologist in October. We will have a frank and open discussion about amiodarone and cardioversion.

He will be dealing with an experienced patient this time.

It’s encouraging to read that a 35 yr-old AF patient such as Haimar Zubeldia can still complete at such an elite level. A few months ago at my 6 mos. ablation follow-up, when asked, my EP advised it was unlikely I’d be riding the Tour this year. I’d like to think the reason has more to do with being a 50+ female than an AF patient.

Zubeldia had his “process” at most only three months ago. He had ONE months rest, including I suspect the “process” giving two months of Tour preparation. He will have gone into the event with good physical resources following the rest but under trained, allowing him to get stronger as the race went on. â€œFor me it was important because three months ago I suffered a persistent atrial fibrillation, which the doctors said could have been the end of my career. I had four weeks of complete rest and treatment by a process.â€
Truly awesome and indicative that hard physical effort is not inconsistent with AF

Inspiring. Four years ago I gave up playing basketball and other sports because of AF, and have missed it greatly. Now that my AF is no longer plaguing me (“in remission”? “cured”? I don’t know) I am slowly starting to get back into more rigorous exercise. I might not return to my hoops career because that sport is so hard on the joints, but there are many other options out there even when you are on the north side of 50. Unlike Zubeldia, my cardio fitness level is absolutely pathetic (I run like an “old man” now), but it’s way better than it was when my AF was still active and I couldn’t even run across the street.

Speaking of exercise, I was riding my bike on the weekend when I rather stupidly took a bit of a tumble at very low speed. I scraped my knee, and I looked down on it expecting to see a bloody mess because I am on dabigitran (Pradax). There was nothing of the sort; it looked only little worse than it would have without blood thinners. When I was on warfarin, every trivial bleed, such as shaving cuts, turned into a 911 call (I exaggerate) requiring antiseptics and bandages. My blood seemed to run like water. On dabigitran, casual bleeding seems to be much more, well, casual. Not sure if this is a scientific finding or not, as the studies obviously focused on more serious things like strokes and internal bleeding.

I find being fitter and doing exercise helps me feel better, even or perhaps especially when in AF. Now post ablation my AF episodes are much less frequent – had been persistent for prior 9 months – and life is so much better. Still not AF free so may go for a second AF if I get the opportunity.
On warfarin so banging my head is a real concern Considering coming of it now post operation (3+ months), go kayaking, less worry cycling and could get that big, sticking out tooth extracted.

I had persisent AF for four years, spelled by brief intervals of NSR after various interventions (electrocardioversons and ablations). This made aerobic exercise difficult, so I concentrated on strength training. I found that this helped me cope with everyday chores such as shoveling snow and mowing the lawn.

I ride road bikes and race mtn bikes. I’ve had paroxysmal atrial fibrillation, one episode in 2006, then off and on since 2008. I’ve been lucky that 400 Mg of Chelated magnesium and 5 Mg dose of Bisoprolol have kept AFIB pretty much in check. The only thing I have to worry about is replenishing blood sugar after a long ride (50 or 60 miles). I’ve never had to have a cardioversion, I since 2008 I’ve always converted back to NSR. I’m one whose phyiology allows strenuous exercise with help from the magnesium and bisoprolol. The lowered heart rate from the beta blocker does not seem to hurt performance. My body adjusted in a week or so.

Good luck with the exercise.

I was in and out of AF for years with varying affects on my physical activities. June 2011 I had surgical ablation and was essentially AF free for one year. Now I find myself back in AF, though atrial flutter, not fib. Higher heart rate tires me but I am determined to keep up a minimum level of physical exercise even if I stay in AF. Riding stationary bike for 30 minutes, canoeing, walking. I always feel good while exercise in AF then very tired and light headed after. Any others exercise during AF?

Have had AF over 10 years and from last June till my ablation in March had AF all the time. Generally have managed to keep fit, still cycle, kayak. Now things are much better. Especially during AF I take much longer to recover, do much shorter efforts to keep fit. The 30 second protocol works well. Means I cannot get particularly fit but can still do 100 kilometer days with 1000m of climbing. Did a slow 3 hours accent of Mount Ventoux last month. Went into AF early on when taking a drink.
Just keep plodding on only more slowly, and takes longer to recover and much longer I think to build fitness.
Don’t let the bugger win.