I get a lot of questions about atrial flutter.

Atrial flutter is a common arrhythmia that shares many similarities to its next of kin, AFib; but there are important differences.

1. Atrial flutter is defined as a rapid but organized rhythm (tachycardia) in the top chamber of the heart (either from the right or left atrium). In typical cases of atrial flutter, the atrial are contracting at 200-300 bpm. [Note: Do not confuse atrial rate with pulse rate. The pulse rate (or heart rate, originates from the ventricles, which beat at some ratio of the atrial rate—see numbers 2 & 7]

2. The rapid atrial rhythm of flutter differs from AFib in two important ways: First, when the atria fibrillate, the rate is well above 300 bpm, and this results in quivering, never contracting atria. Second, fibrillating atria have a very irregular rate. In flutter, the atria are going fast but are regular. These two factors have important implications. It’s hard to explain, but the regularity of atrial flutter contributes to more rapid conduction to the ventricles—and this makes it harder to control the pulse rate of atrial flutter compared with AFib.

3. The symptoms of atrial flutter vary widely. On the one end of the spectrum, patients with flutter may report no symptoms, while others report severe problems, like tachycardia, loss of consciousness, chest pain or a feeling of dread. Most flutter patients however report fatigue, shortness of breath, and decreased energy levels. Many say, “something isn’t right.” 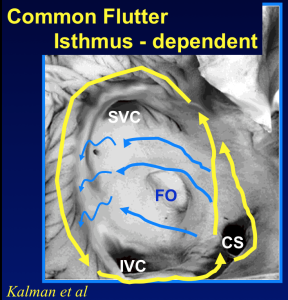 5. Think of atrial flutter as a single big (usually) circular circuit. Whereas AFib can be considered chaos from numerous different locales (an oversimplification); atrial flutter tends to be one rotating circle. Usually, but not always, the circuit is in the right atrium. (See image.)

6. Atrial flutter does not occur spontaneously. It is initiated or induced by a burst of atrial arrhythmia. The inducing beats may be merely benign premature beats (PACs or APCs), a short burst of supraventricular tachycardia (SVT), or it may be that a sequence of AFib organizes into atrial flutter. (I know you want to ask why this happens or how often. I urge you not to ask these questions. We don’t know why; and it’s hard to quantify how often AFib organizes.)

7a. High Heart Rate: An atria in flutter may drive the ventricles too fast. The most common scenario for atrial flutter occurs when the atria are at 300 bpm and the ventricular rate (pulse rate) sticks at 150 bpm. We call this 2:1 A-V conduction. All sorts of rates are possible. It might be an atrial rate of 240 and a ventricular rate of 120. The ratio can vary too. In 3:1 flutter with an atrial rate of 270, the pulse rate would be stuck at 90. You get the picture.

7b. Loss of Rhythm/Synchrony. When the atria beat at a different rate than the ventricles, the cardiac output is reduced. How much less varies a great deal. The reduction might just be 10%, but it could be up to 30-40% less in older stiffer hearts. Most patients notice the difference, though some do not. (See number 3.)

7c. Increased stroke risk: In terms of the risk for clots and strokes, European and North American guidelines do not distinguish between flutter and AFib. Drugs that block coagulation (anticoagulants, ie…’blood thinners’) are recommended in atrial flutter similarly to AFib. The explanation here is beyond the scope of the post, but keep in mind that most patients with atrial flutter also have (at least the tendency for) AFib (See number 13.)

9. Heart rate control of atrial flutter: Just like it is in AFib, it is important to get the pulse rate under control. In most cases, this does not have to happen immediately. In fact, attempts at rapid heart rate control can lead to problems. Things that lower adrenaline levels help lower the heart rate in atrial flutter, like peace, quiet and transiently limiting exertion. The most common drugs for rate control are the beta-blockers (by far the best), calcium-entry blockers, and digoxin. Recall that rate control is the means for preventing heart muscle weakness (heart failure). Persistent tachycardia, over weeks to months, can weaken the heart muscle. The good news is such muscle weakness is rarely permanent; the bad news is atrial flutter is tougher to rate control than AFib. (See number 2)

11. Rhythm control drugs rarely work to control atrial flutter. Rhythm control therapy of atrial flutter differs greatly from AFib. In fact, most rhythm drugs (not beta-blockers, Ca-E blockers or dig) can create a favorable milieu for atrial flutter. That’s right; some AF-rhythm drugs (propafenone, flecainide for example) often make atrial flutter worse. This is especially relevant to athletes on AF-drugs. Athletes who take AF-rhythm drugs (without beta-blockers or Ca-E blockers) can sustain dangerously high heart rates during exercise. I tell athletes who take these drugs to either not exercise, or stop exercising, if they feel like their heart is out of rhythm.

Let me explain: remember I told you flutter was a circular circuit. This means the trailing edge of the circle must have recovered from the passage of electricity—or refractoriness. The slower the circuit, the more time the tissue has had to recover, and the more likely it is that the circular rhythm persists. One of the ways AFib rhythm drugs prevent AFib is by slowing conduction. This effect may prevent AFib, but it may also favor the organization of atrial flutter circuits. What’s more, this concept—that slowing conduction favors flutter circuits—is why atrial flutter can complicate AF ablation. Here, the incomplete creation of ablation lines injure—but not deaden—heart cells. An injured group of cells conduct poorly and these areas of slow conduction create anchoring points for circular flutter circuits. (This is less of a problem now that AF ablationists less often make linear ablation lines, and when we do, we work hard to make them complete and durable.)

12. Cardioversion of atrial flutter: A very simple way to terminate atrial flutter is to shock the heart. This sounds awful, but is really quite simple. After a patient has been on anticoagulant drugs (usually up to 3 weeks), a cardioversion can be done safely. Cardioversion takes minutes. The patient is sedated (for a few minutes) and then a shock is delivered. The heart nearly always goes back to regular sinus rhythm. With adequate anticoagulation, the risk of cardioversion is tiny. The problem of course is durability. Atrial flutter recurs after cardioversion in well more than half the cases. The recurrence may be in hours, days, months or years. I frequently recommend cardioversion for newly diagnosed atrial flutter. 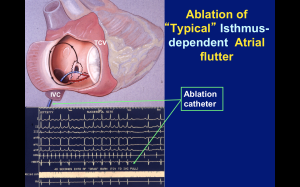 13a Catheter ablation of right atrial typical flutter is easy and very effective. It is a focal anatomic procedure that targets one area and requires just a few ablation lesions. The picture on the right depicts the flutter ablation procedure. The isthmus between the tricuspid valve and inferior vena cava is easy to get to, consistent in location and not often near important structures. Ablation there is well-tolerated, and complications from flutter ablation are much less frequent or severe than AFib ablation. Unlike cardioversion, atrial flutter ablation prevents recurrences of flutter.

14. The best approach to patients with both atrial flutter and atrial fibrillation: This is also a tough one. Many patients with atrial flutter also have episodes of atrial fibrillation. In these patients, it’s clear that ablating just the flutter circuit will take care of only part of the problem. Here is where shared decision-making comes in. Although ablation of typical flutter circuit might be partially effective, the procedure is easy and safe. Flutter ablation is a much smaller procedure than AF ablation. So the upside of an incremental approach is symptom relief with a smaller procedure. The downsides are incomplete symptom relief, persistent need for medicine and the possibility of a second procedure (AF ablation.) Some patients seek total elimination and accept the risk of the bigger AF ablation procedure while others like the more conservative incremental approach. There is no right answer here. It’s an individual call, and the doctor’s input is critical.

15. Atrial flutter also responds to lifestyle changes. This is similar to atrial fibrillation, and all of heart disease. Good food, good movement, good sleep and good attitudes help prevent all forms of heart disease, including atrial flutter. It’s silly to medicate, shock or burn the heart and then not do the basic lifestyle things to help prevent recurrences. Yes, it is true that atrial flutter often requires an intervention, but the chances of a second procedure or more treatment decrease with simple lifestyle choices. Athletes with atrial flutter pay attention here. If you keep inflaming yourself incessantly after flutter ablation, do not be surprised that you are in the 50% who develop AFib. (And please do not ask how much exercise is too much. That answer is unknowable.)

I hope this helps.

This is not supposed to be a book chapter, review article or medical advice. It’s just a rough guide.

If you have a general question that was not answered, feel free to post it. But…Please do your best not to ask questions specific to your case. Of course I can’t give medical advice over the Internet.