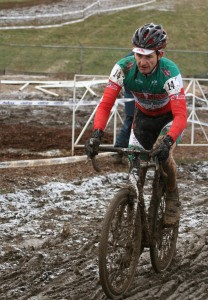 A serious writer would not make habit of serving up frivolous race reports. Is chronicling the efforts of a watt-deficient middle-aged (grandfather) CX racer even worth the bandwidth?

Perhaps not, but this was a special week in Louisville. And with all the seriousness in the world, a little tomfoolery might be soothing. I promise that some day soon, I will compose something medical and serious–and not so Flemish.

But let’s digress, just a little, to the 50-54 Masters World Championship:

On Tuesday of last week, in 68 degree heat and just hours after heavy rains drenched an already soaked abandoned golf course, I rode from a last row call-up (can one say ‘call up’ if you are in the last row?) to a respectable 7th place in the heat. That earned me a second row start in the 62-person final two days later. 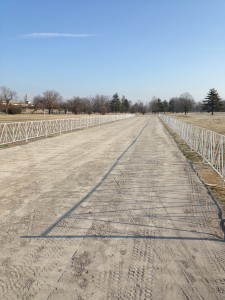 The start gird–frozen before the rains

In the final, I lined up in the grid right behind the Canadian national champion and diagonal from US champion and defending World Champion Steve Tilford. Besides the freezing temperatures and cold wind, all I could think on the start was getting clipped in the pedal on the first go around. “Get your cleat in that pedal, John.” This seemingly simple step is critical in all CX races, but it was especially so that day.

The weather had changed and heavy rain had turned the course into a muddy, almost frozen, ankle-deep fudgy mess. Immediately after the 200 meter ‘paved’ (not really paved, more like a crushed mystery gravel) start, the race emptied into a large soupy bog of mud. Okay John, you don’t want to be in the crowd heading through the spray. Picture going 25mph through a blinding spray with 61 other guys who have trained for months for this one race. No, I did not want a bad start.

But that is exactly what happened. It took two revolutions to get clipped in and now I was fortieth instead of top ten. Darn it. CX is all about dealing with adversity. It really wasn’t all that bad, as I moved the morass without any significant mishaps. 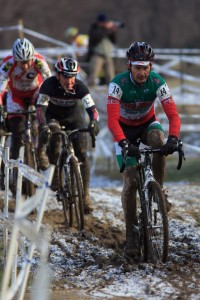 After the semi-paved finishing straight, the rest of the race could be best described as a tractor pull. More than 90% of the course was a muddy soupy mess. It wasn’t slippery mud; it was heavy mud that grabbed your wheel. People asked if I fell. I didn’t; it would have been nearly impossible to fall because the slow speed would have allowed time to get a foot down. And even if you fell, it would have been like falling on a mattress. Think…plop!

Midway through the race, I gradually moved up to about 10th to 15th. Friends along the course call out your place–as if knowing it makes a difference.

As frozen mud clung to the wheels, frame and drive-train, the importance of having a pit bike and seasoned crew became obvious. Fortunately, I had my wife Staci and Brian A, the city’s best CX mechanic, in the pits. They did great work but had limited tools. A cold front had frozen the water lines to the power washers. Brian told me before the race to pit only if necessary. Without adequate power washers, he was not sure the bike would be ready. 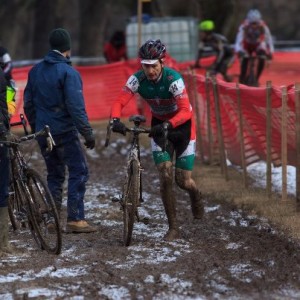 This stuck in my head during the race. I switched bikes a couple of times without incident, but each time through the pit I noticed long lines at the one power washer. These concerns, significant no doubt, were quickly overshadowed by the pleasant feelings of a clean bike. Sadly, the clean thing lasted for nary a hundred yards, until I prodded through yet another mud bog.

With one lap to go, I had just changed to a new bike. I was feeling decent and had just passed 3 guys. A supporter called out 12th place, which I thought wasn’t too bad. The 3 guys I had passed stayed close. I could feel them on my wheel. The course was worsening rapidly; the mud grew thicker; the falling temps (now in the high 20s) was freezing the grass-mud mixture on the spokes and in between the frame and brakes.

I had only a half lap to go, when I approached the pits for the last time. The binary choice echoed in my head: take a new bike (was it ready?) or tough it out for another 5 minutes. I plowed forward, staying with the known. (Oh, how middle-aged that decision is.) It was a big mistake, as only a hundred or so yards past the pits. the wheels would barely turn. Coming to the final run-up, I hoisted the bike onto my shoulder only to learn that it weighed more than my heaviest kettlebell. It was so heavy–and the wheels were stuck! My AC joints ached. 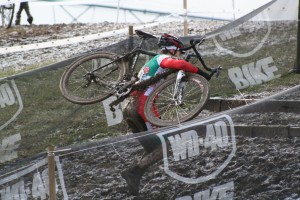 Alas, each of the guys that I had just passed came around me in the final 250 meters. I had to settle for 15th. Ironically, and sadly, this is exactly where the pre-race computer ranking had predicted. One always hopes that the results might differ from the predictions. That it won’t always be the same. But let’s not dwell on anything negative. 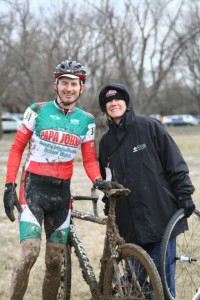 Though it would be hard to prove, I suspect the camaraderie and respect offered to CX racers negates the inflammation.

To crit season we go. Now that’s my specialty.

h/t to Jeff Miller from VO2-Multisport and Kent BaumgardtÂ  the pics.