Yet even more remarkable than the vastness of AF’s prevalence is its diversity.  AF could be the most diverse disorder of any organ system.  For instance: 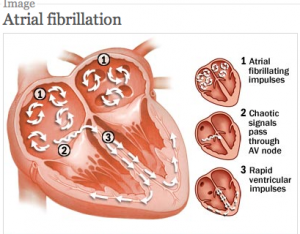 AF is an irregular heart rhythm affecting the heart’s upper chambers: the right and left atria.  Normally, the sinus node (the natural pacemaker cells in the right atrium) controls the heart rhythm.  This creates a regular pulse at a normal heart rate which is conducted via the AV node (the heart’s central north-south highway) to the pumping chamber.

In AF, the upper chambers are overcome by a series of micro-short circuits resulting in atrial heart rates of 300-500 beats per minute.  Because the AV node blocks a variable ratio of these the ventricular rate is irregularly-irregular.  In many patients, the AF heart rate is faster than normal, but in others it is not.  This electrical chaos is AF.

In the past year, I have written about AF frequently.  Here is a link to some of my posts on general atrial fibrillation topics.  And some past favorites…Atrial Fibrillation 101, AF-ablation 301, and the most recent AF-ablation fall-2010 update.

Thus the treatment is also three-fold:

Stroke prevention: Before 2010, the difficult-to-use blood thinner warfarin was the only means to prevent strokes in AF.  However, in late 2010, the exciting and novel blood thinner, dabigatran (Pradaxa) was released.  As of late 2011, the FDA has now approved the second non-warfarin blood-thinner, rivaroxaban (Xarelto). Here are my archived posts concerning both warfarin and dabigatran (Pradaxa).

Rate Control: Since the AV node is the electrical connection (north-south highway) between the atria and ventricle, controlling the rate of AF involves modulation of AV node conduction.  This can be done with drugs (beta-blockers, calcium-entry blockers, digoxin) or with catheter ablation of the AV node (which would then mandate pacemaker implantation.)

Rhythm Control: The aim of rhythm control is to prevent the atria from fibrillating in the first place.  In the past, the only way to do this was with anti-arrhythmic drugs, of which there are many.  In the past decade, however, for selected AF patients, catheter ablation has emerged as a superior strategy for rhythm control.  Ablating AF is a special interest of mine.  Here is an archive of my posts on catheter ablation of AF.

2012 update on AF ablation: Things have changed in the world of AF ablation. It’s easier. I, like many ablation-ists have reached a threshold number of cases where we feel comfortable with catheter manipulation. Technology has greatly improved as well. For instance, non-xray imaging technology (think GPS) have been enhanced, and this leads to more precise placement of burns. Blood-thinning regimens, saline-irrigated catheters and a minimalist movement towards making less burns have all increased the safety of AF ablation. For both patients and AF-doctors, AF ablation remains a ‘big’ procedure; but it’s surely gettin much easier and more commonplace. I recently wrote that AF ablation may be an easier journey.

(Other AF-ablation-related posts that may be of interest are: those that tag Pulmonary Vein Isolation; a post with video images of AF ablation; my latest (June 2010) summary of AF ablation; and one of historic interest on how the difficulty of ablating AF makes choosing patients for ablation a challenge.)