For those interested in atrial fibrillation, there was significant news made last week.

Dr. Sanjay Narayan and colleagues, including highly respected Indiana University electrophysiologist, Dr. John Miller (also a JMM), finally published their exciting data on FIRM ablation. The CONFIRM trial (Conventional Ablation for Atrial Fibrillation With or Without Focal Impulse and Rotor Modulation) has now been published in the Journal of the American College of Cardiology. Journalist, Michael O’Riordan, nicely covered the details of the study on theHeart.org.

This is exciting stuff. It may in fact be a turning point in AF ablation.

My comments, written for a medical audience, can be viewed on the Trials and Fibrillations Blog at theHeart.org.

There are two truly novel things about FIRM ablation: 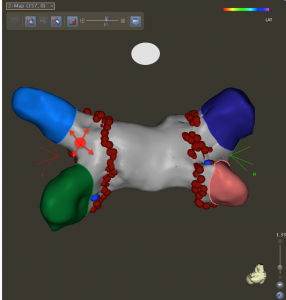 We use point-to-point RF ablation (it can also be done with cryoballoon) to encircle and electrically isolate the PVs. These burns act to build electric fences around the PVs. As I simplistically depicted above, the source or driver of AF often lies within muscle sleeves surrounding the PVs. The major problem with current-day PVI is that the lines depicted above are not as durable as we would like. Over time, gaps can develop and AF can escape out into the atria. Re-do ablation targets these gaps.

The other problem with PVI occurs when this happens: 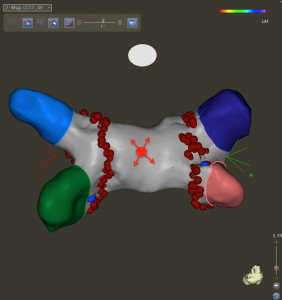 In this picture, the important area lies outside the burns. In other words, we’ve isolated Maine, Florida, Seattle and LA, but the problem was in Kansas. That’s the thing: we don’t currently know where these ‘areas of interest’ reside. More importantly, until FIRM ablation data was published, we weren’t even sure they existed.

The CONFIRM trial tells us that patient-specific areas not only exist in human atria, but they can be targeted with brief ablation. And doing so, improves long-term success.

Though this is huge news, there is one major caveat: The ability to detect these areas depend on one company’s proprietary computer software, which has yet to be explained or published. Electrical data obtained from basket electrodes placed in the right and left atria are fed into a Topera Medical computer. The computer-generated map magically tells the ablation doctor where to burn. It’s crazy…I know.

We shall see how this plays out.

I am so hopeful.

Assuming that FIRM ablation pans out, would it be a replacement for PVI or would both methods be used on AF patients?

Thanks for the post John! Sounds like AFib is more and more becoming an ablatable disorder with hope for much better control than ever before. Must be truly exciting for you on the forefront. We appreciate the explanations & color diagrams – : ) Ken

What is your current thinking on cryo ablation? If memory serves, you were not a fan early on, but went for training in the past few months. Is it better? Has the technology matured to the point of replacing the RF burns? I was hoping you might do an update on cryo. The FIRM data is pretty amazing. Thanks for posting and simplifying.

Great explanation. Can you give us a comparison of the procedure times for RF, cyro, and FIRM? I ask because I read somewhere that FIRM ablation takes much less time than RF, but on another site someone said her EP stated the FIRM “procedure is short, yes, but the mapping takes many, many hours, during which time the patient is anesthetized. So the overall time is way longer than the standard ablation.”

I realize time for any one of these procedures can vary widely based on patient needs but a difference in typical times of, say, 3 hours vs. 10 hours seems notable to me.

Also, are FIRM patients required to lie still for several hours after the procedure? I’ve seen several people post that this was the most difficult part of an ablation for them. Would be nice to avoid this, if possible, although this seems somewhat like a minor point in comparison to the medical leap promised by FIRM.

FIRM ablation is just ablation that is directed by an electronic device that identifies the locations where ablation should be focused. Does anybody know where FIRM ablation is performed. I know about UCSD, UCLA and Indiana University. Anybody know of any other places?

A person who goes by cathybucks29 followed up on this and added locations:

BTW, Dr. Mandrola, I’ve found that the actual time of FIRM-only ablation (i.e., no PVI performed) typically is about 90 minutes, “skin-to-skin,” which (I learned) in the medical world means the actual time of the procedure itself, from cutting the skin to completion of sewing it up. The old “open to close,” right? Am I right in assuming that for the FIRM ablation “skin-to-skin” means time from the first cut to insert a catheter to completion of the removal of procedure catheter(s) and includes both the mapping and ablating?