When you look around at other riders before the start of a bike race, and yes, everyone looks at everything before bike races, you will see an array of colored drinks in ridersâ€™ bottles. What are they hydrating with, you wonder? Likewise, when you roll into the store stop two hours into a four-hour training ride, the colors of sports drinks in the cooler could fill a rainbow. What is the best color or brand?

Tonight Iâ€™m going to talk about the mystical topic of sports drinks and hydration.

Itâ€™s a timely topic–for three reasons: the summer heat continues to foil any serious attempt at outdoor training; this Friday marks the start of the 2012 Olympics and the popularity and intake of sugar-laden sports drinks has paralleled the obesity epidemic.

My interest on the matter of sports drinks was tweaked when I saw this highly tweeted guest post on Cardiobrief. In the aptly titled, The BMJâ€™s Amazing Shock and Awe Assault on Sport Drink Science, noted medical blogger and obesity medicine specialist Dr. Yoni Freedhoff summarized seven â€œincendiaryâ€ articles recently published in the British Medical Journal. 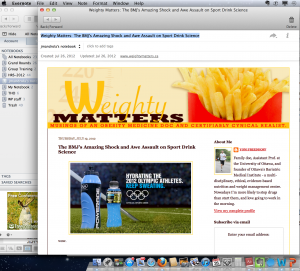 If you are at all interested in endurance sports, this post is a must read. No check that, you should store this treatise-like post in Dropbox, Evernote or whatever cloud you fancyâ€”for future reference. An added bonus: the original articles (and references) are available for free on the BMJ website. Thatâ€™s really nice.

I learned a ton from reading the thousands of words in these articles. Here are seven things that struck me as most notable: (Iâ€™ll invoke the KISS principle.)

1. There is no compelling scientific evidence to support the claim that sports drinks improve athletic performance. When the cited literature from websites of sports products were critically analyzed, researchers found 143 of 146 articles were either absent or scientifically worthless. The 3 articles that were scientifically valid each found no benefit to sports drinks. (Farce alert: One company actually cited a supporting study on rat metabolism published in 1930!)

2. A corporate influence cycle exists: It all began with Gatorade. Sports drink makers sponsor scientists. These scientists developed an entire area of science dedicated to hydration. These same scientists, leaders in their newly created field, began to advise influential Sports Medicine groups. Guess what the Sports Medicine leaders did? They wrote guidelines on hydration that filtered down to public health recommendations. The guidelines emphasized the dangers of hydration and you guessed it–the benefits of sports drinks.

3. Thirst best protects humans from dehydration. The first job of the corporate-sponsored hydration scientists was to dispel the idea that thirst protects humans from dehydration. They needed to promote the idea that normal thirst mechanisms were not to be trusted. Again the science is illuminating: I learned thatâ€”given access to waterâ€”humans protect themselves from becoming dehydrated. Harvard doc, Arthur Siegel says, â€œdehydration has gotten all the press and attention partly because of sports medicine associations who have endorsed the dangers of dehydration, but in fact dehydration is not life threatening,â€ The ever famous Professor Tim Noakes (Lore of Running) adds that â€œdehydration is a normal biological response to exercise. You lose water; you get thirsty; you drink. End of story.â€

4. There is no proven link between dehydration and heat-related illness. Not only are there no systematic reviews of this topic, the few studies that show a relationship between dehydration and heat illness are scientifically flawed. Thereâ€™s even less data for children. A review article from the British Journal of Sports Medicine had this quote: “There are very few recent well controlled exercise physiology studies of heat and exercise in children that are directly applicable to real world field conditions.â€

Note: This doesn’t mean we should revert to the thinking of my era (“tough guys don’t need water”), but rather, that preventing heat-related illness requires more than just drinking fluids. Things like modifying the intensity and duration of exercise are important.

5. Dehydration during sporting events might actually improve performance. This study of cycling time trial performances concluded that up to 4% of body weight loss during a TT does not alter performance. Compared to drinking fluids based on prescribed sweat-loss formulas, those cyclists who gauged fluid intake solely by thirst rode faster. This study of marathon finishers confirmed these findings in runners.

(In defense of my recent advice to hydrate completely while riding in excessive heat, I would add a couple of caveats on this seemingly contradictory information: One is that studies on cycling time trials in normal temperature conditions do not generalize to riding in 100 degree heat for more than two hours. Time trials are short efforts, which reduces the risk of dehydration. I suggested that when planning a long ride in hot conditions starting the day with a large glass of water and drinking a bottle before a long ride might help. I’m no nephrologist, but that’s not going to cause hyponatremia. Remember, most of us do not ride with team support cars at our side. Regular riders, like you and me, might go long periods between store stops. We might not have free and unlimited access to fluids.

6. Hyponatremia (low sodium concentration) poses a serious risk to athletes who drink excessively in the face of sweat loss. Hyponatremia can be best understood by thinking of it as water excess rather than salt deficiency. Basically, in cases of exercise-induced hyponatremia, excess water in the body dilutes the sodium concentration. Contrary to the claims of sports drink makers, that electrolyte-containing drinks help replenish salt levels better than water, the supporting science is lacking. This NEJM study concluded that the content of fluid replacement did not matter–salt-containing fluids were no different than water. Again professor Noakes goes against the grain with his claim that over-hydration is a greater risk than under-hydration. His editorial in BMJ is particularly worth the read.

7. The color of urine does not accurately reflect hydration levels. Think vitamins and the diuretic effects of caffeine.

There’s a lot to digest here. Seriously, go read Dr. Freedhoff’s post and the BMJ articles. You will learn a ton.