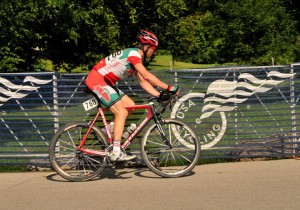 Perhaps, even more dangerous than distracted or mean motorists.

Itâ€™s the heat. Gosh, is it hot. If only I had a dollar for every time I heard someone say, â€œDoctor M, you aren’t riding in this heat; are you?â€

Well…Other than the fortunate souls smart (or lucky) enough to live in cooler climates, most of us are facing an extreme wave of hotness. As a Kentuckian, I live in the epicenter of this summerâ€™s cauldron. Louisville sits in a wind-protected valley alongside the heat sink that is the Ohio River. Think hot and steamy.

The excessive heat smacked me hard last evening. Normally, my highly-veined skin and northern European heritage serves me well in the heat. But last night, while riding in sight of our city’s skyline, it started: My mouth grew dry and my breathing labored. And why was that helmet feeling so tight? Next came the sensation of tinglesâ€”not the pleasant kind of tingles, like when your teenager hugs you. And then came the deal-breaker: chills. I stopped, swallowed my pride and called for a ride home. (Hereâ€™s an always for you all: When itâ€™s ninety degrees out and you feel cold–stop exercising, immediately.)

After last nightâ€™s brush with heat exhaustion, I thought it reasonable to ramble on about the dangers of exercising in the heat. And of course, I will offer some nuggets of wisdom for beating the heat.

First, here’s some basic biology of exercising in the heat:

—Heart rates run higher. To cool the body, the heart needs to send more blood to the skin. Since our vital organs malfunction at high temperatures, the body possesses exquisitely sensitive heat management systems. My heart rate runs about 10 beats per minute higherâ€”at the same watt output–in extreme heat. Yours probably does too. As a beating muscle that requires energy, the heart will fatigue more rapidly at higher rates.

–Fluid losses in the form of sweat are greater. This means the body will ‘dehydrate’ much sooner. Lower blood volumes results in less nutrient transport to vital organs and muscles.

—Blood thickness may increase. As the fluid part of the blood decreases, its viscosity increases. Thicker blood may increase the risk of clots. Think of molasses traveling though a pipe. Now there’s an incentive to drink more fluids.

Here are a few tips for beating the heat.

Of course, I like to start with the big picture items. Theorems if you will.

Theorem 1: Avoiding exercise because of bad weather is not a good option. Regular exercise represents one of the three components of healthâ€”good nutrition and sleep are the other two. A good friend and teammate once remarked, “there’s no such thing as bad weather, only inadequate gear.” He was speaking of preparing to ride in cold temperatures, but the same logic applies to hot extremes.

Theorem 2: We are humans; we can overcome challenges by reasoning, and applying common sense.

Theorem 3: The three ‘Ps’–planning, preparation and priorityâ€”can guide us in overcoming the heat.

This quote from another of my teammates is highly relevant to exercising in the heat. He frequently hollers this sage advice whenever it gets dangerous on the bike: