You make promises to yourself, right?

I made a big one when starting this blog. It was a promise not to post Pollyanna-ish health advice. People can read about the importance of wearing sunscreen and getting basic vaccines anywhere–and everywhere.

But tonight is different. Iâ€™m taking the risk. (Give me a chance; I’ll do my best to spice up the basics.) 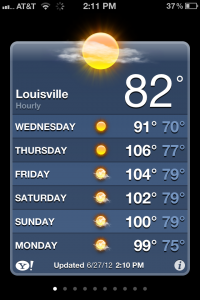 This kind of heat really does threaten those who fail to master the obvious.

No. If I had a dollar for every heat-related heart illness that Iâ€™ve seen over the years, Iâ€™d have half that retina MacBook paid for. Seriously, one of the bodyâ€™s most tightly regulated systems is temperature control. We are heat-dissipating machines. Thatâ€™s because organs begin to shut down at high temperatures. Blood thickens, adrenaline spikes and blood pressure drops. Inflammation runs amok. We are all vulnerable.

Iâ€™ve seen the strongest of cycling cyborgs reduced to babbling and shriveled patients.

We told DB that it was an 80-mile road race in 95-degree heat. No early attacks, we will ride together. DB is an ER doctor. He attacked at the gun. After a group nature break, his gap rose to 15 minutes. On the final climb, aptly named the Furnace, our mate was traversing the road and speaking in an unknown language. When we finished the race, DB was busy schooling the paramedics on the latest study of volume expansion. They nearly dropped him out the back.

DB’s brush with heat stroke is an extreme example. Even mild dehydration and heat exposure can play havoc with susceptible patients. Now Iâ€™m talking to middle-agers with (or without) AF. The stressful effects of heat-illness–electrolyte depletion and high adrenaline levels–can act as pokers of the nests of cells that drive or initiate AF. You don’t want to poke these cells. Remember: the thing about first arrhythmia episodes is that the day before you were fine. The day after, you are in the club. Dang it.

Okay, let’s do a list–the diet pill for bloggers.

Here are ten Mandrola rules for dealing with the heat:

Feel free to add in any personal nuggets of wisdom for dealing with the heat.

And be careful out there.