Whew. The Boston AF symposium digests slowly. Processing nearly the entirety of AF into just three days borders on ridiculous. Well at least for us regular guys, you know, those of us that doctor, not model things mathematically.

This year, I tried something new: posting slightly refined quick notes on each lecture, mostly in real-time. Such e-notes, I think, helped digestion. When you post something your brain works harder to get it straight, embedding it deeper into the memory neurons. (Think book reports in school.)

Well at least, all this Bluetooth-tapping and iPadding impressed my tech-savvy colleague. When he saw my setup, he offered this complement, â€œCool, at least your e-notes wonâ€™t be worthless like my written notes. I mean who looks back at written notes these days?â€

Such micro views are one thing, but what about the macro viewâ€”like looking at recordings at a slower sweep speed? How does AF look from on far?

AF as a measure of affluence: 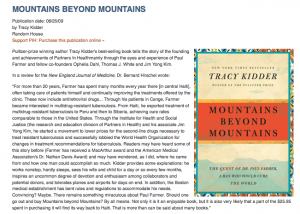 Just before coming to Boston, I finished the amazing book, Mountains Beyond Mountains, the story of Dr Paul Farmer, a Duke and Harvard-trained whiz kid who brought modern medicine to some of the poorest regions of the world–Haiti most famously, but also Siberia and Peru as well. Award-winning author, Tracy Kidder chronicled the double life of Dr Farmer: one as a Harvard Infectious Disease specialist making rounds in one of Earthâ€™s richest hospitals, and the other as a doctor to the poorest of the poor. Reading the story of Dr Farmerâ€™s struggles with AIDS, Tuberculosis and poverty can change oneâ€™s perspective on doctoring AF. Remember that for the most part, a patient has to live into middle age to suffer AFâ€”a great challenge for those withoutâ€¦wellâ€¦what we all have in droves: food, drink, housing and iStuff.

As an AF patient I feel okay about thinking of AF as a luxury.

At its root, AF mystifies. We simply do not know why atria fibrillate. Let me repeat, no one really knows! Sure, sometimes AF comes from wear and tear. Aging and high blood pressure sag muscles and insert non-conducting â€˜tissueâ€™ (scar = fibrosis) between heart cells. But all old people sag and scar but not all get AF. Why?

And some atria fibrillate because nests of cells want to fire crazily. Whyâ€™s that? And what trigger(s) kick these nests in some but not others? Where are these nests? Why do they sometimes move?  See. We donâ€™t know. When ablationists ablate AF, our electric-fences isolate the buzzing nests. But why does this strategy work in some but not in others?

We do not know?

We do know that genes play a role in AF, but this puzzle has yet to be taken out of the box. You know itâ€™s an important puzzle though, because how else could AF afflict so many of Northern European descent while sparing those with African lineage? And how else could AF feature prominently in those compelled to inflame themselves by measuring success with acquisition of success. Pure theory here, but the genes that drive A-students to obsess about getting As may also play a role in AF.

Speaking about not knowing stuff about AF. What about our approach to ablating AF?

Different professors profess different ablation choices. Some like more burns, some less and some in between. Comically, each expert knows their way holds truth. And most, but not all, of these experts also seem to believe that promoting their way loudly, at a lectern or in prestigious journals, increases its rightness.

Take this one example of unknowing:

During a recent visit (not saying how recent) to a famous EP lab, I witnessed the vagary of AF ablation. First, the famous doctors described an AF patient who was in regular rhythm as â€˜persistent.â€™ Notwithstanding the notion that this (paroxysmal) AF patient will someday be dubiously logged in the column of a medical journal as persistent, the researchers than did something peculiar. After doing standard PV isolation, they induced AF. Then they targeted funny-looking sites called CFAE (Complex Fractionated Atrial Electrogram). AF then stopped; but not during a burn. AF just stopped on its ownâ€”a not uncommon likelihood.

â€œDone!â€ They were. How do they know they are done? Equally famous groups donâ€™t even try to induce AF. Others would have tried again to restart AF. Others donâ€™t target funny-looking states.

We donâ€™t know which approach is correct.

The same. Same stories. Same people telling the stories. Same unknowns. Same hope in an easy solution–this time a basket and a video that allows a single burn to work. (Yes, I have heard similar stories of magical success before. Allow me to harbor doubts about this California dream, please.) Same poshness of the Seaport Hotel.

Wait, here are some new things about the meeting: No more free lunches. Higher costs. No industry-sponsored programs. Three doctors I talked with had used their entire CME allotment with this one meeting. Hmm.

Though we can do a lot for AF, lots more in fact, there remains much climbing. And the climb serpentines, for we know not whatâ€™s around the corner(s).

One truth remains: itâ€™s far better to avoid this disease in the first place. Prevention. Now thatâ€™s a good plan. Only it starts in grade school, like all of disease prevention.

3 replies on “Looking at atrial fibrillation from afar: Ouch.”

You should read more novels – a bit of escapism and, I am sure you would say, anti-inflammatory!

Yes, it is a good book, but there are loads more even better. Let us know if you need recommendations 🙂

In your Big Summary you say “One truth remains: it’s far better to avoid this disease in the first place.” I’m still wondering how?!?

I’m 59 now, and have had AF for at least 5 years (god knows how long before they discovered it in the recovery room after a routine bunionectomy…never any symptoms before, and for a long time after that). Whenever I go for my yearly checkup to my GP, his nurse always has to use that finger-clip thingy to take my pulse…they’re calling it chronic AF. So I’m in the AF state more often than not.
It doesn’t affect daily life so far…maybe it’s my body’s “normality” and I learned to live with it. But it reminds me that it’s there every night when I lay on my left side.

Sounds like a great book…I love medical novels! Ever read “Cutting for Stone” by Abraham Verghese? Riveting…couldn’t put it down!

All the best to you and your family in the New Year!

Sorry about your AF. But it sounds like you are adjusting pretty well.

Thanks for the tip on AV’s book. I haven’t read it yet, but plan to.