I have said that the best tool for treating atrial fibrillation (AF) is education. I still strongly believe this, perhaps more then ever.

AF presents itself to people in so many different ways–from no symptoms to incapacitation. Likewise, the treatments for AF range from simple reassurance and lifestyle changes, to taking a medicine, and on to having a complex ablation[s].

Because knowledge is so important to patients with AF, I encourage them to do outside research. This surely means going on-line. The problem, of course, comes with assessing the quality of information. It reminds me of what an old professor used to profess, â€œno data is better than bad data.â€

Last week, this provocative AF headline came through on one of my Google Alert emails:Â 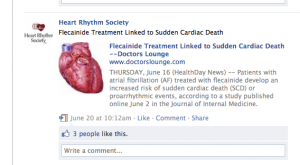 The story originated from HealthDay News and was carried by many other health-related sites. It was even posted on the Facebook page of the prestigious Heart Rhythm Society.

Whoaâ€¦I wondered to myself how I had missed such an important development. The potent heart rhythm drug, Flecainide, is one that I recommend frequently. I have even taken it myself.

But then I looked past the headline to the actual journal article. The study was published in the low impact Journal of Internal Medicine.

The single-center Swedish study looked back at a mere 112 patients with AF that took Flecainide between 1998-2006. They reported that three middle-aged patients died suddenly; two of the three had autopsy proven heart attacks from typical coronary obstructions. They also reported that another seven patients suffered non-fatal heart rhythm problems related to Flecainide–medical people call this proarrhythmia.

So far, there is nothing newsworthy, or even publishable, in the article. We already know that AF drugs can sometimes make the heart rhythm worse. That two of a 112 middle-aged patients died of heart attack is also not surprising. Heart disease is our number one killer.

The researchers then did something very misleading: they compared the event rates of their tiny population of flecainide-treated patients to â€œmatchedâ€ controls in the general population of all of Sweden. The problem of course, is that matching the groups is impossible.

They then went on to incorrectly conclude:

â€Our findings indicate that SCD or proarrhythmia might occur [with flecainide], even in a relatively healthy AF population.â€

The final straw of this highly flawed study came when I had our librarian print the actual article. In the disclosure section, it turns out that two of the researchers receive support from Sanofi-Aventis, the makers of Multaq, a controversial AF drug that competes with flecainide.

So in summary, here is an obscure medical journal that publishes a tiny look-back study which makes erroneous comparisons and purports false conclusions. But none of this stops its propagation on health-related social media. Not one of the health sites with the scary headline mentioned prior trials which have demonstrated the safety of wisely-prescribed flecainide. In contrast, here is a study (of more than 114,000 patients with AF) that highlights the safety of flecainide.

There is a lot about our information revolution that is fantastic. I would never want to go back to using index cards and putting nickels in copy machines. But…

P.S. The purpose of this piece is not to advocate one AF drug over another. Like anything else in medicine, AF treatment should occur in the setting of a doctor-patient relationship.