Protocols and mandates cannot govern all of medical practice.

You may know the story already. Here’s my brief summary:

In the early 2000’s, Medtronic released a family of defibrillator leads that were promoted as thinner and easier to maneuver. They even made them pretty to look at.Â  And they delivered on their promise; they handled beautifully, which made the implant surgery easier.Â  I used them; so did many other docs, as more than 250,000 were implanted.

The problem was the leads weren’t durable; they failed way too frequently.Â  Many of these failures were unexpected and sudden. Some patients died, many more suffered painful shocks. Soon after their widespread acceptance, though some would argue not soon enough, Medtronic pulled them from the Market in 2007.

Since the majority of these leads were placed in 2005-2007, and ICD generators last about 5-6 years, many affected patients are now coming up for elective ICD generator change.Â  This brings to the fore some interesting problems.

Should we place a new lead at the time of elective surgery? The knee-jerk answer is yes.Â  But placing a new lead increases the risk of surgery.

What if the lead hasn’t shown any problems?

What if the patient is pacing-dependent? In this case, abrupt lead failure could be catastrophic, but so would a surgical complication.

Today, a report in Circulation provided some important data on this vexing dilemma.Â  The trial followed 1023 patients with Sprint Fidelis leads from 2001-2009. The researchers from three-centers (one in Boston and two in Minnesota) reported six relevant findings: 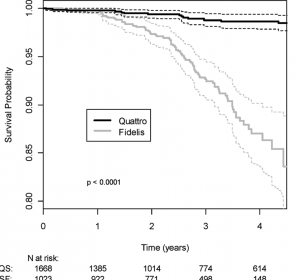 Real-life patients with Sprint Fidelis leads illustrate the darned if you do and darned if you don’t doctrine.Â  One doctor may see the risk of lead failure as too high, while another sees the risk of surgery as worse.Â  Some patients become disabled after shocks, others pay them little mind.Â  Some operators are highly skilled at placing new leads, for others it’s a more serious challenge.

This current study helps confirm my bias for replacing the Sprint Fidelis lead at the time of elective surgery, especially in a younger patient with a normally contracting heart muscle.

But we are still a long way off from applying the cookbook principle to this problem.