I hear it every day. The pattern is so repetitive.

“I am so fatigued. I just wear out so easily.  At the end the day, I am done.”  The spouse may often add, “he is so short-winded, even little things.”

Doc, I thought it was just my age, or stress, or that I am not sleeping well.”

It is atrial fibrillation. In my practice, it is always AF.  It feels like an epidemic, of fatigue.

So it is with no surprise that I read this recent study on increased electrophysiology workforce demand. In this month’s Heart Rhythm journal, a survey of 700 arrhythmia professionals revealed that there is a marked increase in demand for heart rhythm doctoring.

It is what I have experienced the past decade. Atrial fibrillation is the primary driver. Everything about this disease is complicated. It is complicated to explain the problem, it is difficult for patients to understand the many issues, and most of all, it is difficult walking the tightrope of not making the treatment worse than the disease.  AF isn’t fun, but sometimes the therapy is far worse.

In AF, it used to be digoxin, warfarin, and sorry, live with it. Things were simple.   Now, we have new drugs (more coming), catheter ablation and even open heart surgery as available tools. The recent EP workforce study reveals that an increased demand for ablation procedures is a root cause for the increased workload.

But ablating AF is not like any other ablation. They are longer, more dangerous and less effective than other ablations. Here is a picture of a common SVT ablation.  One spot, a few burns.  Done, easy.  Well, not that easy. 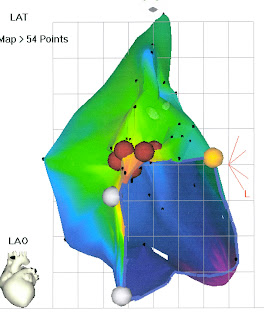 Here is a typical lesion set for AF. There are many more red-dots. Not so easy. 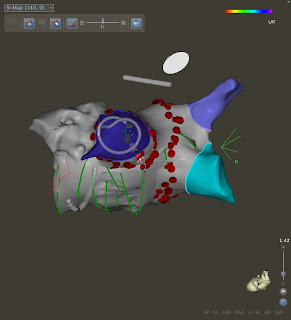 When one substitutes half their ablation volume for procedures that take three times longer, workload increases.  Also, each one of those hundred red-dots can be impermanent.  This leads to recurrent electrical conduction.  So, like in the early days of squishing blockages, where one angioplasty frequently lead to another, signing up for one AF ablation means there may need to be another.

And it is not just AF ablation that contributes to the increase workload for EP doctors, it is cardiac devices as well. There used to be one and two lead pacemakers and ICDs. Now more than half my device implants are bi-ventricular devices.  The BiV (CRT) device has three leads, and implanting the third lead (a coronary sinus lead for LV pacing) often doubles the degree of difficulty of surgery. 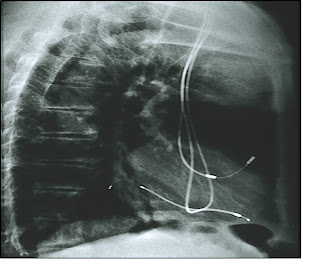 Once these devices are implanted, patients do better. That’s the idea, isn’t it? Patients are protected from sudden death, and those that stay on the plan, live on and on.  The device population that needs follow-up grows. Workload increases because patients with heart failure and coronary artery disease keep on trucking.

In parallel with the explosion in therapeutic options available to heart rhythm specialists, and an aging population with way more atrial fibrillation, we also have the new healthcare system to contend with.

(Don’t worry, I will not drone on, in yet another diatribe on the maladies of healthcare reform, you all know them well, but suffice to say that that recently enacted policies will have a major effect on our workload.)

The HRJ paper notes that the majority of EP doctors describe being on their limit for their work capacity. Those doctors not on their limit, or possibly those that only think they are on the limit will surely not be encouraged to do more in the present healthcare climate. A climate in which our increasingly better care is devalued.  Why would better care be worth worth less? Apples are worth more than Dells, and carbon bikes cost more than aluminum bikes.  And don’t give me the argument that more care is not necessarily better care.  Try telling that to the symptomatic AF patient, or the cardiomyopathy patient with a LBBB. They want the fury of modern care, not Dr Berwick’s version.

Perhaps even worse than being compensated less for a better product is the outrage of the most recently enacted barrier to optimal arrhythmia care.  As described by my colleague, Dr Wes, in which he tells the story of having to seek permission for cardiac device implantation.  From whom?   Here is the outrage: from a United Healthcare doctor-in-a-cubicle. Electrophysiologists train 11 years after college, evaluate the patient, and yet, still have to seek permission for treatment from the patient’s profit-conflicrted insurance company cubicle people.

These are not complaints, just the facts.

As patients grow older, and unfortunately fatter, atrial fibrillation is spreading like pink eye in a classroom. We can unleash some serious fury on it, but doing so requires much manpower. It takes years to get good at the heart rhythm doctoring thing, and now the majority of electrophysiologists are on their limit.

When normal activities leave you breathless, or your heart feels like a container of butterflies on addarall, you will want a specialist with years of experience to see you, and not be too tired to treat you.