Every morning I rest my coat on a chair in a shared office that has this picture on the wall. 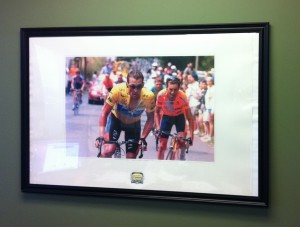 My son and I were glued to the TV that day.Â  We cheered loudly and hugged each other after Lance rose up from the pavement and stomped away from his rivals.Â  (Rivals that have subsequently been either implicated in, convicted of, or admitted to doping.)

The picture of Lance belongs to my partner. We are both avid cyclists, we both trained at Indiana University in the 1990s (when Lance was there), and we both hope that Lance’s “miracle was not a mirage,” as David Epstein describes in his recent seven-page Sports Illustrated piece.

For me, deciding about Lance can be likened to medical decision-making.

In medicine, a diagnosis is not always completely confirmable. Sometimes doctors are forced to decide on treatment without absolute proof they are right.Â  In these cases, like grand juries do, we make judgements based on the evidence.Â  At the same time, though, good doctors also make a measure of their own degree of certaintyâ€”leaving an open mind to alternative, far less likely etiologies, which we call ‘zebras.’Â  The zebra reference stems from the ancient diagnostic adage that says if there are hoofbeats outside your door, it is more likely a horse than a zebra.

The problem for Lance-believers is that when one considers the details of Mr Epstein’s piece the hoofbeats are loud, and we are not on a safari.