The end of the year marks a time for list-intensive posts.

Recently, Larry Husten, from Cardio-Exchange and Cardiobrief, asked for my opinion on the three most important cardiology-related news stories of 2010.  Additionally, he also wanted three predictions for 2011.  (I assume cardiology predictions.)

My top three cardiology stories of 2010: 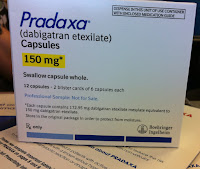 —By far, the number one heart-story of 2010 was the release of the novel blood-thinning drug, dabigatran (Pradaxa), for the prevention of stroke in atrial fibrillation. Until this October, the only way to reduce stroke risk in AF was warfarinâ€”the active ingredient of rat poison. Assuming that there aren’t any post-market surprises, Pradaxa figures to be a true block-buster.  Doctors and patients have waited a long time to say good-bye to warfarin.

—The Mark Midei stent story: Whether Dr Midei is guilty or innocent of implanting hundreds of unnecessary stents isn’t really the big story.  The real impact of this well-chronicled saga is the attention that it brings to the therapeutic misconceptions of coronary stenting. The problem with squishing and stenting is that although they improve the physics (of blood flow), they do not change the biology of arterial disease–a hard concept to grasp when staring at a picture of a partial blockage.  The vast press coverage of Dr Midei’s alleged transgressions has served to educate many about this nation’s number one killer, heart disease.

—The percutaneous (non-surgical) therapy of valvular heart disease.  Presently, the only effective means of treating valvular heart disease is open-heart surgeryâ€”the most invasive of invasive. Percutaneous approaches to both the mitral valve and the aortic valve made news in 2010.  Of the two, Transcatheter aortic valve implantation (TAVI) is farther along. The Partner Trial (NEJM-October 2010) showed that patients with severe aortic stenosis who were not suitable for surgery fared better with TAVI than with medical therapy.  That the Partner Trial was non-negative means that further investigations into percutaneous approaches to valvular heart disease will continue in earnest.

Here’s a real life vignette to illustrate why non-surgical treatment of valvular heart disease is exciting.

He is an “old” 82; thin, grey-haired, and he keeps coming in for breathlessness and chest pain related to severe aortic stenosis. That dang valve just will not open. He lives alone, but barely; he has a walker, and a scooter for the grocery. His mind is sharp and his disposition good. “I can’t handle surgeryâ€¦I know that, but I am happyâ€¦Can you help me?” he asks.

Perhaps in the future, we can fix his aortic valve without a saw.

—A pill or surgery will never effectively treat obesity.  Take that one to the bank!

—Coronary stents will surpass ICDs in regulatory oversight. And on a more general note, due to our utilization of expensive imaging studies and costly implantable devices, cardiologists will be increasingly burdened by the take-the-fun-out-of-medicine regulators.

Thanks for asking, Larry.

Dr. John — any thoughts on the new device treatments for LAA occlusion in patients with AF? Especially for those who cannot tolerate warfarin? It seems that this is an area of growing research.

Hi Dr. John – very interesting predictions here, but I do have a question, as a heart attack survivor myself:

I am not exactly sure what you meant by the question? Is increased regulation a good thing for treating MI's?

In general, the problem with present-day over-regulation of medicine is that it is actually a form of covert rationing of healthcare. The excessive forms, and pre-authorizations with detached and profit-conflicrted cubicle-doctors are two examples of extra hurdles to jump before providing care to people. There are many more, especially if you include the "quality" movement. I will have more to say on that in future posts, but suffice it it say, spreadsheets will always fail in measuring the quality of doctoring.

Acute MI patients, however, remain insulated from much of this bureaucracy. This is because of the time-sensitive nature of treating MIs. In my moderate-sized city, acute MI patients benefit greatly from rapid door-to-balloon times at AMI hospital; all but one ambulance company transmits ECGs from the field wirelessly, and ambulances direct AMI patients to the nearest AMI hospital. I think that our city is representative of most in the area.

It is true that the LAA occluding devices are interesting, They are still in experimental trials, and I have not been part of any of these trials. My thoughts are that these devices may be useful in a narrow niche of patients who cannot take blood-thinners.

Much of the motivation for developing these devices has been the awfulness of warfarin. As warfarin is gradually replaced by novel blood-thinners–like dabigatran–the impetus for these devices may wane. They are invasive, tricky to implant and the LAA is quite variable in anatomy.