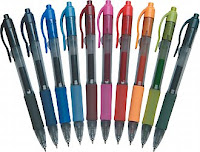 “John…Why are you going out in the cold?”

“I need some stuff for work.”

“Pensâ€¦those cool felt tip ones that write really dark and bold.”  I like it when the ‘Electrophysiology’ note stands out in the chartâ€”like John Hancock’s signature did.

Until a few months ago, a pacemaker company used to give out nifty plastic pens.  They were awesome: brightly colored, lightweight (cyclists like everything to be lightweight), and they wrote smoothly. You couldn’t leave them laying around; they’d be snatched up in no time.

But these instruments of proclamation have gone the way of the narrative-only non-EMR patient letter. Vanished.  You see, plastic pens with industry-logos represent far too much temptation, far too much potential conflict of interest for doctors. They had to go, the all-knowing pen-banners proclaimed.

However, I, like most masters of the obvious, know that the notion that a 99 cent plastic pen could influence a doctor’s decision is a bit like a pre-teen believing in Santa.  They want to believe, but can’t because of reality.

The subliminal message of a plastic pen with an industry logo just doesn’t rate high enough on the influence scale to change a doctor’s behavior. It’s true and obvious; don’t over think it.

And for proof of their wrongness of scale, the pen-banners need only read yesterday’s front page WSJ article in which the excesses of the now (in)famous Norton Hospital (Louisville, KY) spine surgeons are chronicled in gory detail.  Granted, Kentucky has its problems with obesity and sedentarism, but who knew that there was this much spinal disease in our medium-sized midwestern city.  So much so that a 640-bed hospital would rank third in America in spinal fusion surgery.

Sure the 1000 dollar screws are eye-grabbing, but clearly the most striking feature of the article was the hard-to-fathom size of the royalties paid by Medtronic. For their “intellectual contributions” to product development, each of the five Louisville spine surgeons were paid 1.38 million in 2010.  (And this was only for the first three quarters of 2010.)

That’s a lot of pens! And just a little conflict.

As a doctor, it’s incredibly sad for me to read about such tomfoolery.  For most readers, it would be easy to conclude that such excess are a representative sample of doctors as a whole.  Although compelling, this conclusion would be dead wrong.  Rather, this story is similar to the saga of the one unruly kid who caused the whole class to loose recess. But in this case it would be that that one bad-boy made the whole school miss recess.

Ok, Ok… John….That’s a lot of words to say that a few doctors and hospitals reaping huge rewards from medical device surgery are not representative of doctors as a whole.

Is their anything else?  Any other lesson, message, conclusion?

From 2004 to 2008, Medicare paid Norton Hospital $48 million for the 2,475 spinal fusions it performed on Medicare patients during those five years, according to the Journal analysis.

The problem for masters of the obvious, is that we see the farcical regulations, like pen-banning, as distractions to the greater problems at hand, like a distorted compensation system that rewards quantity of care not quality of care.

Oh, and one more thing, I never felt very conflicted about eating a pharma-bought bagel or sandwich, and I sure don’t now.