There were no books read, no MacBooks tapped, and not even one medical link looked at this weekend.

Out-of-town bike racing was on the docket. And this was no ordinary local showdown; it was a humdingerâ€”Cincinnati’s UCI CX festival. There were professional racers, their entourages and trailers, multiple emcees, serious-faced officials and of course, the ultimate drawâ€”prize money.

So, it goes without saying, whenever this many fast people show up, it’s curtains for a blogger and electrophysiolgist.  (Although, it was pretty exhilarating being in that elite front group for the first lap; if only there weren’t 5 more laps. “Hey guys, I am a doctor, would you all mind slowing down a bit,” never seems an effective strategy.)

I have said it before, but I will say it again: racing cyclocross brings out the best in us humans. It’s hard to pinpoint why exactly, but the respect shown to CX racers (at all levels) is palpable. Perhaps it is because everyone there, racers and fans alike, understand the courage it takes to toe the line and expose your ego for all to see, or invariably, photograph into permanence.  “It’s raw; it is so real,” said one dad who decided to try pinning a number.

Here are three of my favorite vignettes from a very special weekend:

After three consecutive days of racing and travel, a beginner bike racer, a mom, a doctor, proclaimed she was too tired to race. Anyone could see from her expression that the life-force had been squeezed from her.  Self-doubt was etched in her eyes.

Yet after only a trace of cajoling she did indeed start the raceâ€”and then achieved her best result of the weekend.  The message was clear: when you are tired, sad or dejected, so are those that have suffered with you previously. This notion is true in bike racing, and true in life. 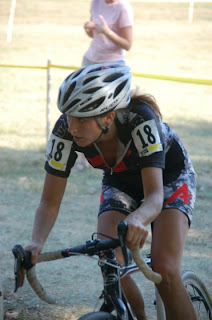 Like medicine is, bike racing is most compelling because of the stories. People stories, like the story of a young college student who was struck with more grief this week (and past year) than any fun-loving carefree teenager should ever have to endure.  This past week, her stepdad–an avid cyclist–was fatally struck by an inattentive motorist.  His death was mourned a thousand miles away from her college town, where she should have been in class, or drinking coffee in a quaint campus cafe.  She is so little, so blond, so shy, but yet she was gifted the strongest of heart, lungs and legs. She is our friend and our hearts ached for her.

But you see, bike racers race their bikes, and so she did this weekend.  Surely, while she was hanging with our country’s best professionals, she was not thinking of her family tragedyâ€”or maybe she was, and it was pushing her on like a motor would.

She did beautifully.  Her results were her best ever.  But her best result was that as she raced people yelled, “We love you!”

Racing with your family:

The children of CX racing make our sport even more beautiful.

I pity the poor soccer moms and football dads who sit passively behind a fence watching their children compete, and then when the game is over they don’t get to share the same fields of truth.

When my son or my wife race, I cheer, and then when I race, I listen for them. Their voices are so good–the sweetest of sounds.

Maybe I am wrong; maybe it is just a race, over and done–don’t over think it.

But there are the messages, the metaphors that are so obvious: stepping over fear to the start line, getting up from a fall, not quitting when adversity strikes, learning to make mistakes in front of others, giving hugs, getting hugs and feeling tears of happiness when there were tears of grief.  All this.

John, the best part of riding a bike is the people you meet. Great stories, thank you.