Skip to the content
The first time my barber saw my shaved head, he smirked, and told me he didn’t think healthy people shaving their heads helped cancer patients. (Conflict of interest does not only involve pharmaceutical and medical device companies.)
He’s right and wrong.

Sure, my agreeing to have my head shaved by the highest bidder doesn’t help the poor fellow with the brain tumor, which jumped off the screen of the MRI, that just happened to be displayed, while I was visiting my friendly neuro-radiologist. I gulped hard when I saw that angry-looking, irregular, and densely white mass, and then, â€œAge-48.â€  Nope, my bald head doesn’t help him. 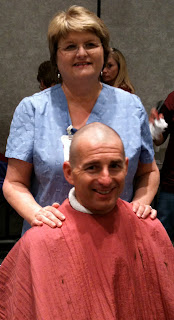 But on the other hand, not all good deeds are so tangible. A good hospital has a feeling of community–call it a soul. Things like familiar faces, friendly faces, good doctors, and committed leaders, at all levels.  Our hospital has these things. (full disclosure: I am a former board member)  Here is Pat, a cardiac nurse manager, who won the bid to shave my head.  Pat was working as a â€œseasonedâ€ nurse when I joined in 1996, and some 15 years later, she and most of her staff are still working on that same cardiac unit.
Participating in the â€œGo Baldâ€ campaign may not pay for the red or blue colored IV drips that kill cancer cells, but surely the near palpable good sensations in that auditorium–a beauty shop for a day–helped something, or someone, somewhere. It was a room populated with those interested in doing good for the sake of goodness, rather than self-promotion. â€œGet on that wheel,â€ I thought.

Until my hair grows back, and the novelty of baldness wanes, I am lumped into an admirable fraternity of people whose jobs are to help people feel better. That there is a â€œGo Baldâ€ campaign, speaks to the ethos of many of our hospital’s,â€œgood people’s.”

P.S. Baldness provides other useful benefits: your head gets rubbed (a lot), riding a bike with a bald head on a warm day feels really good, getting ready in the morning takes 60 seconds less, and I saved some money on haircuts.

Dr. J , love your blog ! For those of us who have a-fib, keep it coming. You are a inspiration to those who exercise to stay healthy and compete. Good stuff !

Glad to see you were a repeat willing participant. I did my part as a "virtual shavee" this year via the St. Baldrick's push (participating thru the other community hospital down the road): http://bit.ly/9BYPuW

My official time under the clippers was mid-March. Thus, my hair is essentially back to pre-cut length. I agree with you on all accounts—-it's a great cause AND the 60 seconds saved per morning is quite nice as well. TS

Beauty is in the eye of the beholder!