I know physicians. They are smart, hard-working and prideful. They do a lot of good in this world. But one thing we have been utterly incapable of doing is organizing together and speaking as one voice.

The American Board of Internal Medicine may have changed that. The hubris, overreach, and tone-deafness of ABIM may have gone too far. Now, there may be a glue strong enough to hold physicians together. 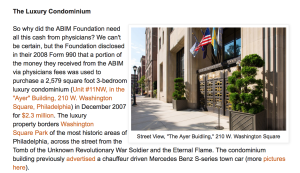 My colleague Dr. Wes Fisher culminated a 2-month investigative journalism adventure yesterday. He published his piece on the inner workings of ABIM, its foundation and its $2.3 million condominium in Philadelphia. Wes’ work uncovered such things as domiciles in other states, $840K expenses for the condo, big salaries for executives, among other things. I’d recommend reading the entire piece.

Another influential voice in ABIM opposition appeared this week. Internist and author Dr. Danielle Ofri, writing in the New York Times, suggested that board certification has gone too far. Stop Wasting Doctors’ Time is also worth a read. Dr. Ofri reviews two recent studies in JAMA that showed board certification had little to no effect on quality measures and costs. This has been my take as well: that there is no data to confirm that the ABIM brand (an expensive one) of medical education is effective or safe.

When I was preparing for my Top Ten Cardiology piece, I reached out to colleagues to ask about their views of the big stories of 2014. Every one of them mentioned the onerous new mandates from ABIM.

State medical boards, the American College of Physicians and the AMA have now pulled back from the idea of tying medical licensure to certification. Thousands of doctors have signed anti-MOC petitions. The opposition crosses specialty lines. Social media has amplified these voices.

This, my friends, may be a tipping point. I believe there’s a bigger story here than just medical education and opposition to an overreaching organization.

Doctors coming together to speak with one voice. That is something I would not have predicted.

I received an interesting email this week from the American College of Cardiology. The purpose of the note was to relay the results of a survey regarding memberâ€™s views and concerns of the new changes in board certification.

Before I tell you about the surveyâ€™s striking results and clear message, itâ€™s worth reviewing the contentious debate over the proposed new changes for â€œboard certification.â€

In years past, being board certified meant passing a comprehensive exam given every 10 years by the American Board of Internal Medicine (ABIM). It was a hard test, one that required significant preparation. I have taken the cardiology and electrophysiology boards twice thus far in my career. I learned a lot preparing for these exams, and felt like it was a valuable exercise. (Iâ€™ve always liked tests though.)

For some reason, which isnâ€™t entirely clear, those in power at the ABIM determined that an expensive comprehensive test wasnâ€™t enough to ensure the quality of American physicians. We do so badly after all. So, in collaboration with professional medical societies and health policy regulators at the federal level (e.g. ACA writers) the ante for physician certification was upped.

Beginning this year, the ABIM implemented a more intense program for maintain of certification, or MOC. The most onerous and contentious part of the new process is the patient safety and patient survey modules, which the ABIM provocatively calls practice improvement modules. Just that name drips of arrogance. As in, policy wonks in cubicles, many of whom have not ever taken care of patients other than as a hobby, are implementing requirements of real-world clinicians who know only one thingâ€”how to care for people.

Normally physicians roll over. We just sign the form, check the box and grin and bear it. This time it was different.

In March of this year, even I, a test-liker, wrote a post on theHeart.org calling for a timeout before implementing the new MOC. My reasoning was that the ABIM method of assuring quality physicians has not been validated through clinical testing. Though it is possible the ABIM brand of testing would improve outcomes, itâ€™s also possible that an emphasis on patient satisfaction surveys, blind adherence to guidelines and preparing only for a test could impair doctoring and its outcomes. I also emphasized the profound financial conflicts of interests of the test givers and professional societiesâ€”who profit from selling prep materials.

My point in the post was not to dismiss the benefit of continuing education but to consider a less disruptive more nuanced approached to ensuring an ample supply of up-to-date humanistic caregivers. Just as I do in clinical practice, I advocated for evidence, not eminence, based decision-making.

It turns out that many other practicing docs had the same feelings about the new changes. Many thousands of real world doctorsÂ (17,452 to be exact) have signed a petition stating opposition to the MOC changes. The American College of Cardiology heard these voices and responded by conducting a survey of its members.

The ACC survey of physicians:

The results included responses from 4,406 cardiologists, me included. There was widespread opposition to the new requirements for maintenance of certification. Here were a few of the highlights (the link to the reference is at the end):

This is disruptive. I am sure the ACC would say its members are smart doctors. They would express confidence in American cardiology. Yet they now have to digest the fact that almost nine out of ten of its members oppose a process it has been integral in developing.

Despite its â€œcollaborative and collegial relationship with ABIM,â€ is it possible for ACC leadership to dismiss the wisdom of 90% of its supposedly wise members?

We shall see. I don’t know what will happen.

I write about this topic because it has bottom-line effects on patient care. Consider these three questions:

If a third of cardiologists decrease their workload, is that important for heart care?

If cardiologists are forced to go through an unproven educational process, one that may or may not improve outcomes, is that important?

And then there is this biggy:

If the stunning overreach and hubris of medical leadership provides the catalyst for physicians to finally organize and speak as one, is this important?

My friend and colleague Dr Wes Fisher also commented on the survey.

Here is link to the ACC member survey

I just arrived in San Francisco. I am here for the 2014 Heart Rhythm Society sessions.

The meeting begins today. A poster session this evening is overflowing with notable studies. Stay tuned. I’ll be working hard for theheart.org to bring you the best stories.

First, though, here’s a little appetizer.

On the eve of the biggest EP meeting of the year, my friend Wes Fisher, also an electrophysiologist and writer, posted this provocative piece, When We Reward Regulators More Than Doctors, on his blog. Wes did some investigating and learned that doctor-executives in the testing industry reap remarkable salaries. Ever the techie, Wes graphically displayed the salaries of those who regulate versus those who care for people (e.g. doctor). In a country where the notion of inequality and value are in vogue, the differences were striking. Wes is not shy. He uses the word greed, which seems strong; but he is talking about human behavior.

I wrote briefly on this topic in March during the ACC meeting. Wes, however, is the leader. He has led the charge in opposing the current “board certification” process.

I read his post last night and had time to think about it on a long plane trip. I’ve also thought a lot about the issue of evaluating doctors in the past months and years.

Wes is surely correct to point out inequities of pay between real doctors and doctor-executives. It’s truly awful what reform has done to the humanity of health care. My family doctor works harder than any person should have to; he’s trying to practice medicine the way it was, the right way, according to him. This means coming to the hospital to see his patients at 11 PM–after he finishes a ‘normal’ office day. He’s an anomaly; normal doctors don’t roll this way. Most normal doctors jump off the treadmill before it gets this fast.

The irony of undervaluing the care part of healthcare is that it runs counter to what reform was supposed to accomplish. We meant to help those most in need, but, in many cases, we did the opposite. The shortage of caregivers in poor rural communities, like so many in my state of Kentucky, gets one thinking hard about what we value–about relative value.

Why is US society this way? It’s not just about doctors; what about teaching our children? Why do we collectively look past the obvious?

The other thing I struggle with in this debate is the view of the patient. There must be some way for the public to know his or her doctor is a capable and skilled professional. These are human lives that turn on our skills–like the pilot who landed our plane in windy San Fran last night.

This is where I struggle with complete opposition of a certification process. I want to be tested. I want to compete for business on a level playing field. I’ve made it my life’s work to be the best doctor I can be.

Yet…and this is utter nonsense: If a loyal group of referring doctors change to the competing hospital system next month–I’m out. I could be the Atul Gawande of AF ablation and I’m still out. There’s more. Consider that in our fee-for-service model, where producing RVU (relative value units) is how employers measure doctors productivity, the doctor who thinks too much or asks hard questions could easily be replaced by the quieter young doc who simply likes to do procedures. There’s no column for thoughtfulness on a productivity spreadsheet. Think too much–and you could be out.

From the day I started private practice in 1996, there has never been a legitimate way for a patient to discern good doctors from lousy ones. To use big words, our doctor-evaluation system is devoid of meritocracy. And it’s getting worse.

Ironically, the so-called “quality” measures and patient satisfaction scores only obfuscate the task of finding the best doctor. Do you want a doctor who is skilled at clicking boxes and complying with [perhaps flawed] guidelines, or, do you want a doctor who knows the exact torque to place on a catheter in your body? Or, the doctor who can see your elderly father as a suffering person rather than a list of diseases in need of repair?

Tough questions to get on a test.

These are some of the thoughts running in the background of my mind as I attempt to learn (and teach you) the newest and greatest from the leaders of electrophysiology this week.