I recently received this message: 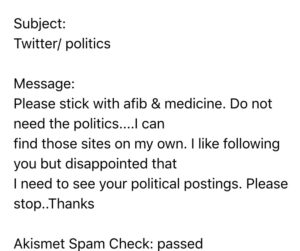 This is not the first time I’ve been scolded for straying from medical topics. Last October, during the Lown Institute’s RightCare Action Week, I wrote about our ailing healthcare system. This prompted a different reader to send a similar message: Stick with topics about atrial fibrillation–went the gist of that terse note.

My first reaction to these rebukes was displeasure. Most people like to be liked, so getting negative reviews stung a bit.

But then I thought about the issue of doctors expressing political views. Maybe I should stick to medicine. I asked around.

A surgeon friend said he avoids politics and religion in all public discourse. He cited concern about mixing personal and professional voices in public. This surgeon is thoughtful and wise. His view gave me pause.

My virtual mentor and friend Dr. Bryan Vartabedian wrote a brief post on the issue. Doctor_V is an expert in navigating the public space.

He concluded with a question:

So the question of whether to weigh in on presidential politics as a public physician should be based on purpose of presence. Why are you public?

That helped me decide how to react to those who don’t like it when I stray from medicine.

I decided that my public voice is not merely as a specialist in a disease that affects millions of people. Patient education is part of my public voice. Sure, I know the heart rhythm; and it helps me, and perhaps others, to share a digital notebook of sorts.

But I am in the public to do more than provide medical facts.

As a doc, I am in the people business. Being a doctor requires understanding the human condition. This quest leads me to history, literature, behavioral psychology, statistics, writing, and yes, even politics.

Non-physicians have much to teach about the human condition. Would you be surprised, for instance, if Harry “Rabbit” Angstrom suffered from AF? I would not.

I spent much of my life learning how molecules and cells and organs work. These are important lessons.

But so are the human lessons one gathers from reading people like John Updike, Philip Roth, David Foster Wallace, Margaret Atwood, George Orwell, Noam Chomsky, Christopher Hitchens and perhaps the grumpiest of them all, Henry David Thoreau. I also love Sylvia Boorstein.

I stray from medicine because I am a public learner.

One way to get better at medicine is to think about how you think. Learn from mistakes. Consider biases. Avoid attachment to dogma. It’s the equivalent of reading The New Yorker and the Wall Street Journal.

The overused word amazing is defined by “casting great surprise and wonder.” Could there be a better word to describe the situation of humans in the United States?

To ignore what drove us to this political place in American history would be like treating AF with only an expensive catheter.

21 replies on “Politics and Understanding the Human Condition”

Aristotle said we are political beings. I think patient education could include one’s position or which party or candidate will be better for healthcare. Choosing the right treatment is meaningless if one doesn’t have access to the treatment.

Like your political comments. I chalk them up to nobody’s perect.

I am very glad that you are constantly expanding your knowledge base beyond the circumscribed universe of pills, cardioversion and ablation.

Your blog has provided so much useful information and many great insights that none of my cardiologists or EPs has bothered to mention.

Weight loss, lifestyle changes, etc. have all become paramount in my efforts to combat afib. Because of what I’ve read and been linked to from your blog, I’ve explored the effects of pericardial and epicardial fat, and fibrosis, and have lost 25+ lbs., which has really made a huge difference in my life. Not just afib, but mobility problems, arthritis, and other ailments of old age are disappearing as I lose weight. And yet none of my docs has ever spontaneously mentioned weight loss.

I enjoy your forays into medical ethics, and the frontiers of treatment of afib. Please don’t be deterred by the naysayers. Keep up the great work you do.

I would rather have a truth-seeking person as my doc than someone who never questions authority or medical dogma. Most, if not all, of my docs have been in the latter category.

After I learnt I had AF, I spent a *lot* of time researching on the internet. After reading some other sites, my conclusion was that I wanted an ablation, and I visited my cardiologist armed with this attitude.

His hesitancy surprised me and made me research further. Eventually I found your web site, which I recommend to friends with this condition as the best source of unbiased and useful information about this condition. It led me to make lifestyle choices rather than placing my faith in drugs and technology.

Now, my goal is to treat AF as a gift that is forcing me to make sensible choices after 54 years of doing pretty much whatever I wanted, and to work hard on putting off surgery for as long as is sensible, and hopefully to avoid it altogether.

Having benefited so much from your site, it would be churlish to complain about your political views or anything else you felt like expressing here.

If we left political commentary to the politicians and journalists the world would be significantly worse off. Keep up the good work, both inside and outside cardiology, John.

Keep it up John. Whoever doesn’t like it doesn’t have to read it.

Well said. We’re all social and political creatures first and specialists and laymen afterwards.
Your political and ethical views are important towards informing your readers by giving them a context within which to gauge your views.
Keep up the good work

Physicians live in the real world dealing with real world problems. You can’t practice in a vacuum. Also, you have every right to express a political view. Readers may disagree, or choose not to read your blog,

Political comments within the context of your blog are not a problem, since the reader can choose to skip over them.

However, political comments/observations expressed during an office visit are not appropriate for obvious reasons.

Overall, as a medical provider I have always found your observations about the US medical system to be both helpful and insightful.

Me is cardiologist from. i follow you even on.heart wire.

Dr B C ROY who was physcian in India become twice chief minister of west Bangle. he has recived Bhartna ratna hieghest civilian award. his contrubution as physcian and also polatician have helped both doctors and also sociaty at large.

i personally say we doctors are also live in this sociaty where we also cast our vote to elect our leaders. being part of sociaty we have right and also responcibility .

Not only can but we also should talk about polatics. or else these polaticians will take for granted

I completely and whole-heartedly agree with Joan. I love your articles and your ability to look at life as a whole. Your approach to a-fib has helped me sooo much!! Don’t change a thing!!

I have found peace in your posts . My husband suffers from A fib and everyone wanted to do ablation . After educating myself through your posts we decided to try lifestyle change before doing this . It worked !! I am so glad for you sharing of yourself . Your political views have only helped me understand and get to know you better . I should have thanked you months ago for all the helpful advice and studies . I know you aren’t trying to educate your way out of a job but I so appreciate you explaining that some afib is the symptom not the disease. Can’t thank you enough .

I have been a reader of your thoughts since your “Buh Bump” article was published in VeloNews, years ago. I’ve learned much as a result of the diversity of your thinking and writing. There have been times when I frowned having read something here and times when I smiled, but in every instance I have been enlightened.

When one thinks about the way he thinks, he cannot but be better. Your contributions, on any topic read thus far, are appreciated. I cast a vote for continuing in your own way.

I appreciate it when you speak your mind. I’m assuming we are all free to agree or disagree, you aren’t ordering us to believe a particular way. Thank you for your information as well as opinions!

I have learned more from this blog and your posts on Medscape then my online courses for NP school! A pill I can look up, guidelines I can look up, the art and the truth of medicine I can not. Bias is everywhere, and you have made me aware of this, allowing me to better critically analyze what is best for our patients. Thank you good sir!

I believe that this election has created less than realistic expectations for so many people. The candidates have so much opposition towards each other that itâ€™s simply caused people to choose sides. If you fully support a candidate you fully oppose the other. Maybe my judgement of people that donâ€™t see things my way will be more understanding after this election. Therefore, mixing political views with medical facts is a bad thing. Mix peas and carrots.
Joe

Bravo Doc! Your political comments give depth to your medical opinions. None of us live in a one dimensional vacuum and, whether I agree with your politics or not, your opinions give me broader food for thought.

Dr. John, please don’t “react to those who donâ€™t like it” when you stray from medicine. Respond gently instead. We all need to take tender care of our hearts!

thanks …..I have enjoyed reading your Article.