Remarkable.  The scene is the Brown Theatre, Louisville Ky.  The crowd, primarily women but surprisingly not all with painted eyebrows filters in and there is this sense that others are looking at each other for validation.  I study their faces to determine whether they are believers and then realize many look at me with the same inquisitive look.  Does he believe?

It is Lisa Williams.  Before this week, I am oblivious to her until a Phi Beta Kappa and Alpha Omega Alpha doctor whom I share a life with, tells me of Ms Williams and her abilities to communicate with the dead or “those in spirit.”   Many proclaim the word “unbelievable” for less than striking things but speaking with the dead of an audience of a thousand is indeed defining.

She stands on the stage and speaks with a british accent and the onlookers stare forward many sincerely hoping to hear from their passed loved ones.  Hope is seen in the faces of many and this believer in science, who cares for the hearts of the masses whether they believe or not is stunned.  Stunned that so many pay -how much is not known as I cannot bear to know.  They pay for this mystique, yet one reads of a recent study which reveals patients see their doctor less often when the co-pay increases only seven dollars.

To Will, also a man (12 year old) of science who attended the family event, I comment something along the lines of the 99% certainty that this is hogwash.  He calls me a believer because giving this idea even a 1% chance of realness means that you acknowledge, however remote its plausibility.   Although 100% certainty seems impossible in science, Will is 100% certain that the masses have been duped.

A doctor, a budding master of the obvious and a believer in science was educated last evening.  The observation of so many well dressed and phenotypically normal people who pay a striking women to help them communicate with the dead confirms the mystery that is the human mind. 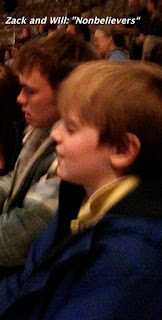 For some comic relief, I give you Zack, a young male friend of Catherine, who is asleep during the communications and Will who is a resolute and absolute non-believer.

5 replies on “The Human Mind…”

I did that with Dan and a friend years ago. The only thing I came away with was? well? nothing really!!HaHa

Same old story. You can sell people anything they want to believe, no matter how incredible.

Grinning today came spontaneously upon thinking of last night. There was much grinning and this is good for the heart. Additionally our teen friends carried on conversations with us today about the events. This is also good. A life experience for sure. JMM

Obviously your days in the EP lab have short-circuited your ESP connections!

Unfortunately, people look for a "quick fix" or "the latest fad/trend in 'fix-me-quick'" to avoid confronting their grief, shortcomings,etc., support their denial, find "answers" to their troubles, anxiety, worries, etc. when the answer are within them, often common sense. Also leading a healthy lifestyle, as you obviously do Dr. Mandrola is the "answer" to many of life's challenges.