I have recently returned from the 2016 Heart Rhythm Society Sessions in San Francisco. 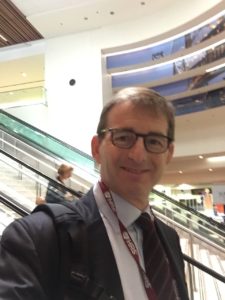 I wrote three articles for Medscape. I also did two podcasts from HRS. I will link these below. You need to sign up for Medscape (free) to read the essays and listen to the podcast.

In the first article, I discussed the good and bad of AF ablation. The good being the increase in quality of life seen in about two-thirds of patients who have ablation. The bad being a study from a Japanese registry which found 1 in 3 patients sustained post-procedural “sub-clinical cerebral ischemic” lesions on brain MRI scans. To translate, that means the researchers found small areas of damage in the brain–likely from debris going north from the heart to the brain during the procedure.

Finding post-procedural ‘white spots’ are not new. What’s new about this study was the very high frequency. There are critics and downplayers of these concerns. They say…no worries, if you give enough anticoagulant drugs and manage the sheaths properly, you can avoid the problem. The non-worriers also make the point that these lesions go away over time. Maybe so. But the Japanese study I cited was larger than previous trials–and they did the procedure in the normal way.

The title of the article is The Parallax of AF Ablation on Display at HRS. History may prove me wrong, but I think being more selective in choosing patients for AF ablation will look wise.

The second article I wrote from HRS involved a new study in ablation of ventricular tachycardia. Since it’s not an AF study, I won’t say much about it here, except to list the title of my essay: The VANISH Trial Should Not Vanquish Good Decision Making. The Vanish trial, however, is an example of clinical science done well. It was a Canadian-run trial.

My third article from HRS revealed chinks in the armor of two stars of modern-day EP. Contact-force sensing catheters for ablation of AF are popular. Most operators like them (I don’t) because they tell you the pressure at the tip–which is supposed to allow for better quality burns. Up until HRS, CF catheters had not been tested in a rigorous head-to-head comparison; they had hype and eminent professors promoting them. Well, when the evidence came in, the results were negative. Use of contact force did not result in better safety or efficacy.

Another technology studied formally at HRS was FIRM ablation. FIRM stands for Focal Impulse and Rotor Modulation. Early studies with a proprietary rotor mapping machine (Topera–now recently acquired by Abbott) showed promising results. But these were not randomized comparisons. At HRS, the group of Dr. Andrea Natale did a proper trial–and FIRM flopped.

The most interesting AF ablation trial came from a group in Liverpool UK. This group studied the strategy of taking all patients who were ablated for PAF back for a second procedure, regardless of symptoms. That’s right–even those without any AF went back. The research team found 2/3 of patients had gaps in pulmonary vein conduction, and re-ablation delivered better one-year success rates. The controversial PRESSURE study endured heavy critique, but I think we learned a lot from it.

My third essay was titled: AF Ablation at HRS: Two Stars Fade and One Shines

Podcasts: As some of you know, I do a weekly podcast in which I offer 7-12 minute commentary on the week’s top stories in Cardiology. You can find these at medscape.com/twic.