It’s been a few days since I returned home from Spain. The jet leg has resolved and normal sleep patterns have returned. I’ve had time to review the entire ESC program book. What follows is a review of my work and some notes on the past week in Barcelona.

The first thing to say about the European Society of Cardiology sessions is its massiveness. The convention site is huge; it’s streaming with people and technology. The press room stretched for more than a hundred meters while more than 500 journalists from all over the world jostled for desk space and power outlets, which led to signs like this: 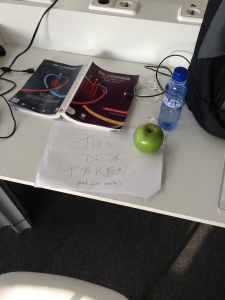 Another thing to say about ESC is that Europeans seem OK with industry influence. The industry exposition area, which is shrinking at US meetings, seems more magnificent every year at ESC. The word largesse comes to mind. Outside the expo, posters get displayed on high-definition monitors; conference rooms have the latest AV equipment and lunch sessions overflow with free food.

The press gets a free lunch (grin), but I often went exploring outside at lunchtime. Interestingly, the speakers at said “sponsored” sessions were often prominent clinical researchers and first authors of major papers. I’m no cynic but it gets you thinking. (Especially since dubious procedures, such as renal denervation and left atrial occlusion, are being performed routinely in Europe.)

My thoughts on industry influence were influenced by my experience in Mexico. There, I was taught, if industry doesn’t support mass medical education, it doesn’t happen. I wonder whether this may also apply to Europe. A number of European doctors I spoke with don’t come to ESC unless they are sponsored.

Sorry, that was a lot on industry.

Let’s move to the medical stories. TheHeart.org | Medscape Cardiology offers me leeway on topics to cover. The meeting spans five days and I try to get one post done each day–which seems hard, except, my journalism colleagues at THO finish 2-3 posts each day. It’s amazing to watch. “Hey Mike, “is that your second story today,” I might ask. “Ah…no, it’s my third.”

This was a big year for ESC. The PARADIGM-HF trial, released on day 1 of ESC, represents the first positive news in heart failure therapy in decades. Novartis came up with a combination drug, still awkwardly named LCZ696, and tested it in a multinational blinded clinical trial against an established winner, the ACE-inhibitor, enalapril. Even though this wasn’t an electrophysiology story, it was the story of the meeting. Here is my take: 10 Reasons to Like PARADIGM-HF and Four That Warrant Pause.

It turns out that Europe, too, has a problem with atrial fibrillation. One center in Maastricht Netherlands has a remarkable way to approach the disease. This group of clinicians and scientists have been both smart and courageous enough to harness the power of nurses. I know that sounds foreign for an American physician to say, but this group not only began a nurse-led AF clinic, but they have actually published data showing that patients randomized to nurse-led care did better than those in traditional doctor-led care. Here is my post on this remarkable work: Dedicated Atrial-Fibrillation Clinics: There Is No ‘I’ in TEAM.

One of the coolest aspects of cardiology is our tools. I sometimes stare at the block of computers in my EP lab. It’s a stunning display of biomedical engineering, as are the capabilities of pacemakers and defibrillators. Still, though, with implantable devices, an Achilles heel is the battery. This is why I got interested when one of the featured abstracts at ESC introduced the concept of a batteryless pacemaker, which, of course, came from Switzerland. It was a delight to sit down with Adrian Zurbuchen,Â  a mountain-biking PhD student from Bern whose thesis is the self-winding pacemaker. Here is my report: The Self-Winding Pacemaker That Could . . . Seeing the Future of Batteryless Cardiac Devices

The inherent problem with ablating AF is a knowledge deficit. We simply don’t know (exactly) where to ablate. The STAR AF 2 study, released at ESC, doesn’t give us these answers, but it does, once again, confirm that less-is-more. STAR AF 2 was a multinational study of how best to ablate persistent AF. We’ve known for some time that PVI (pulmonary vein isolation) alone is the best practice for ablation in paroxysmal AF. What was so remarkable about STAR AF 2 was that PVI-alone also looked best for persistent AF, too. Remarkable because 2/3 of “experts” believed more ablation was necessary in persistent-AF–often a more advanced atrial disease. Here is my coverage: STAR AF 2: Finding the Optimal Approach to Ablation of Persistent AF.

Beta-blockers are drugs, too:

On clinic days, I sometimes keep a running tally of how many drugs I prescribe and how many I stop. It’s usually more than five to oneâ€”in favor of stopping. When I do prescribe medication, it is often beta-blockers. If a doctor could have a favorite class of drugs, mine would be beta-blockers. But two abstracts at ESC show us that even beta-blockers are susceptible to “just-because” reasoning. Here is my recap: The ‘Just-Because’ Use of Beta-blockers Comes Into Question at ESC 2014.

My colleagues at theHeart.org, including fellow blogger/columnist, Dr. Melissa Walton-Shirley, did an amazing job covering this massive meeting. If you want a comprehensive summary, this page and link has it all.

Now it’s off to the trails. Kentucky is not Switzerland, but it feels good to be back on the bike again.

4 replies on “Review of the 2014 ESC Sessions in Barcelona”

THANKS for the update John! I just left the following comment on the page with your write-up on the PARADIGM-HF study:
————
My read of the PARADIGM-HF study offers more reason for “pause”. Approximately 20% of the 10,513 patients initially eligible for randomization dropped out during the run-in phase (that tested tolerance of the medications to be tested). About half of this 20% had adverse reactions to the meds to be tested – but the other half either withdrew consent, had a protocol deviation, were lost to follow-up, died, or “had other reasons” for discontinuing the study. So as encouraging as overall results might be – this is a sizable percentage of patients with HF who were not studied – which means generalization of study results (especially when indication “creep” occurs) is not yet proven. Benefit from LCZ696 has only been shown to date for selected groups of patients with HF having similar characteristics to the 8,442 patients who were randomized (and not for all-comers with HF).

Demographics in this study were selective. Blacks made up only ~5% of the study population; women only 20% – and of note for our country less than 10% of study patients were from the U.S. So we don’t know if PARADIGM-HF results will necessarily predict what will happen when LCZ696 is used to treat American blacks and perhaps even women …

Finally – ~20% of study patients had not been on an ACE-Inhibitor prior to this study. In those 20% of patients – I see no statistical improvement from use of LCZ696 in Figure 3 of the NEJM article compared to Enalapril. This makes me wonder about the authors’ statement in their protocol (found in the Supplementary section of NEJM.org) that “the goal of this study” was to “replace ACE-Inhibitors” as treatment of choice for patients with EF-reduced HF. Given the inevitable expensive price-tag that LCZ696 (whenever it finally gets a name) is likely to have – I don’t know that there is any evidence for beginning with this new drug before trying an ACE-Inhibitor that costs a fraction of the new drug ….

BOTTOM LINE: It IS good news that there does appear to be a new agent (at least the Neprilysin inhibitor prodrug component AHU-377 is new) that has been shown in this huge multi-country study to improve outcomes in certain groups of patients with heart failure. How generalizable these results are to all patients with heart failure I think is still uncertain (despite claims and implications in their publicity by the sponsoring pharmaceutical company who stands to make BIG bucks from this new drug and this study). Time will tell what impact LCZ696 will ultimately have …

The problem with industry influence in Europe (probably not in every European country) is a doctor’s salary doesn’t allow to pay for the registration fees plus the transport and accomodation, the hospitals/universities also don’t have that much money to sponsor them, and when they do have the money, one has to have something to present at the congress. In some European countries, industry even sponsors residents’ training courses – not directly but by paying the registration fees – so the problem is really widespread and not easy to solve.

I’ve been following your columns on Medscape and they have been excellent. (Regarding the study showing that people with AF who went to nurse-managed clinics got better care, we were told that some huge number of them, 97% or so?, got “appropriate anticoagulation.” I wondered what that meant given that only a third had a CHADS2 score of 2 or more and 27-30% had a score of 0; most of these people, had they seen the actual data from, e.g., the big California study would rationally have chosen not to take powerful prophylactics.)

It was rather pathetic to see OTHER Medscape writers try to spin the long-term no-benefit results of the renal-denervation trial into “why we should shove everyone into even more aggressive renal denervation surgeries.” Really? I think it was SInclair Lewis who explained this kind of behavior. You really are quite refreshing in your willingness to learn from science that you don’t already agree with.