CardioStim is the name given to the biennial gathering of the European Heart Rhythm Association (EHRA) in the Mediterranean resort city of Nice, France.

This was my first (ever) trip to France. As most of you know, I write an electrophysiology column (blog) called Trials and Fibrillations over at theHeart.org, which is now called Medscape | Cardiology.

My assignment at meetings is to cover relevant topics from the sessions. This year in Nice, theHeart.org also sent a real journalist, my friend Michael O’Riordan. It was good to have company. I also had the chance to see my dear friend and recently retired colleague, Dr. David Mann, who now lives in Paris and took holiday in Nice last week.

Here’s a picture of the three of us at the Place Massena. 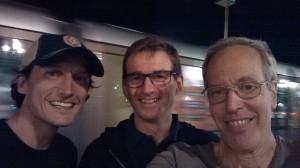 I thought it might be useful to introduce the columns I wrote at this year’s CardioStim.

Day One: A new brand of pacing lead — Could more be better?

A study presented on Day 1 of CardioStim showed patients with congestive heart failure who were implanted with a cardiac resynchronization device (CRT) and a specific sort of left ventricular pacing lead had an 18% lower risk of dying. Although this was an observational trial, which does not prove causation, only association, the reduction in mortality was remarkable. The specific lead used in the trial (made by St. Jude Medical) is novel in design. Its main feature is that it has four electrodes (quadripolar) rather than the typical one (unipolar) or two (bipolar) electrodes seen in LV leads. It’s rare for me to favor brands in cardiac devices, but this quadripolar lead has a real head start. I’ve used the lead, and it works well. The post is titled: CardioStim, Day 1 2014: Does ‘Brand’ Choice Of Implantable Cardiac Devices Matter?

Day Two: EP on the cusp of disruption

Electrophysiologists, like cardiologists, have been mired in a slump in recent years. There hasn’t been any real paradigm-changing developments. The rule has been incremental improvement only. This may be about to change in the field of pacing.

The Achilles heal of pacemakers is the lead–the means of transferring electrons from the generator in the chest to the heart. The development of nano and wireless technology has allowed the possibility of tiny leadless pacemakers, which can be imbedded in the wall of the heart. The post is titled: CardioStim 2014, Day 2: Nano, Mobile, and Wireless . . . Is Electrophysiology on the Cusp of Disruption?

One of my favorite types of sessions at medical meetings is the pro-con debate. This one was provocatively titled: In the era of catheter ablation of atrial fibrillation, anti-arrhythmic drugs will become obsolete.

Yeah, right. The debate featured two giants of the field of atrial fibrillation therapy, one from Minnesota and the other from Germany. The title of the post is: CardioStim 2014, Day 3: Treating Atrial Fibrillation: Drugs, Ablation, or Neither?

I know; that sounds comical. Athletes and normal?

A major area of angst in sports cardiology is the gray area between normal adaptations of the athletic heart, such as chamber enlargement, and true heart muscle disease, which we call cardiomyopathy. A couple of years ago, a group of sports cardiology experts met in Seattle to define normal findings on the ECG of an athlete. Numerous studies have shown that if these “athletic” changes are considered normal, fewer athletes will be misdiagnosed with heart disease.  The title of the post is: CardioStim Sports Cardiology Report — Seattle ECG Criteria: What’s Normal in an Athlete? This is an especially worthy topic because, in an era of direct-to-consumer advertising and disease mongering, “normal” can be a hard sell.

This weekend, I submitted a top-ten poster review from CardioStim. It’s an utterly biased selection of posters that caught my eye. If the editors approve this post, I’ll tell you about it as well.

And… on a closing note, I am sure you know Nice, France is close to Provence. I am also confident you know there is a big hill in Provence. I’ll try to put together a report on my experience there as well.

Here is a teaser I took from my iPhone: 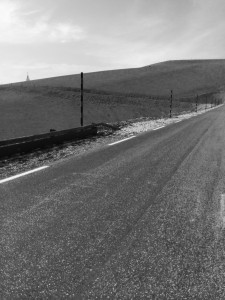