Now that the ‘healthiness’ of products sold at CVS stores is a matter of public discourse, it seems a perfect time to mention the common pain relievers known as Non-Steroidal Anti-inflammatory Drugs (NSAIDs).

It just so happens that two FDA advisory committees are meeting today and tomorrow to discuss the cardiovascular risks of NSAIDs. The Arthritis Advisory Committee and Drug Safety and Risk Management Advisory Committee will hash out details on labeling, and will likely offer comment on whether naproxen (Aleve) may be the least risky NSAID from a cardiovascular standpoint.

I’ve written a lot about the dangers of NSAIDs. I see patients with NSAID-related problems on a regular basis. And it’s not just heart patients that can suffer from adverse effects from these drugs, athletes, too are susceptible. Here’s a story on how taking NSAIDs before exercise might actually increase inflammation.

I am also interested in the use of NSAIDs as a framework for thinking about medical decision-making. As in: the reasons why people take these drugs are obvious: pain hurts; pain causes immobility and there exist few other ‘easy’ alternatives for treating pain. But on the other hand, no medicine comes free of risk. NSAIDs come with serious cardiovascular, kidney and bleeding risks. The balance is precarious. 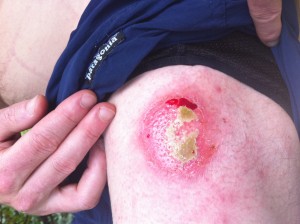 The good kind of inflammation

Millions of Americans seek relief from inflammation and its resultâ€“pain.

The â€˜inflammatory responseâ€™ protects our bodies from invaders (bacteria and viruses, for instance). Inflammation promotes healing. In fact, without inflammation and pain, our species would be naturally selected out of existence. But there are downsides to too much inflammation: in the short-term, pain and immobility, and in the long-term, unchecked inflammation causes heart and blood vessel disease.

The concept of blocking inflammation, therefore, is enticing. If inflammation is bad, letâ€™s design drugs that block it. Unfortunately, itâ€™s not easy to selectively target just the â€˜bad partsâ€™ of a biologic system. Rare is the drug that affects only one thing. The practice of medicine is rife with examples in which attempts at blocking normal processes ends up causing more harm than good.

This is the problem with Non-Steroidal Anti-Inflammatory Drugs or NSAIDs. [Over-the-counter NSAIDs include ibuprofen (Advil) and naprosyn (Aleve). By prescription, the names are: diclofenac (Voltaren), meloxicam (Mobic) celecoxib (Celebrex.) among others.]

Iâ€™m going to make an argument that these seemingly â€˜safeâ€™ pain pills represent a significant (and growing) public health problem. I know; it sounds crazy. How could an over-the-counter drug be that dangerous?

They are. The scope and underappreciated nature of this problem boggles my mind. I learned much of whatâ€™s in this post in the 1990s.

NSAIDs inhibit a class of enzymes in the inflammatory response called cyclooxygenases. This decreases the production of prostaglandinsâ€”chemicals that lead to the pain, redness and swelling of inflammation. Nearly everyone has felt the effect of NSAIDs; the drugs work pretty well. The downside of course is that prostaglandins also play an important role in protecting the lining of the stomach and modulating kidney and blood platelet (clotting) function. And thatâ€™s the catch.

First, NSAIDs disrupt the normal protective processes of the stomach and small intestine. Couple this adverse effect with their aspirin-like effect in the blood and itâ€™s no wonder they increase the risk of GI bleeding. The medical profession has known of this problem for decades, but even today, bleeding from NSAIDs remains a prominent cause of hospital admissions.

Second, NSAIDs have major effects on the kidney. Itâ€™s complicated to explain. Hereâ€™s an oversimplified attempt: Think of the kidney as a big filter. Blood flows through the filter and comes out cleansed. A major determinant of how well a filter functions is the rate of flow through the filter. NSAID drugs decrease the flow of blood through the kidney, thereby decreasing its filtering ability. And this effect is magnified in the presence of dehydration (athletes pay heed), other medicines, high blood pressure and diabetes. Whatâ€™s more, NSAIDs can also have an allergic-like effect on the kidney. We call this interstitial nephritis and itâ€™s not predictable, and in many cases not reversibleâ€”as in dialysis, not reversible!

Third, NSAIDs have been strongly associated with adverse cardiovascular outcomes. Study after study (after study) has shown that NSAID use, especially over the long-term and in patients with established heart disease, increases the risk of stroke, heart attack and arrhythmia. This makes sense. Older patients with arthritis often have other medical problems, like high blood pressure and heart disease. Prostaglandin blockade from NSAIDs impair kidney function and mess with the precarious balance of clotting function in the blood. This spells trouble for the heart.

If bleeding from the gut, kidney failure, high blood pressure and the potential for heart damage arenâ€™t enough to give one pause, consider that there is little evidence that NSAIDs relieve arthritis pain any better than acetaminophen (Tylenol). A now famous (Indiana University) study published in the New England Journal of Medicine showed that acetaminophen was equal to ibuprofen in the treatment of patients with bothersome knee arthritis, even when ibuprofen was used at high dosages.

For young otherwise healthy (well-hydrated) patients who seek short-term pain relief, NSAIDs probably arenâ€™t dangerous. But the use of these drugs for more than a few days, or in patients with medical problems, increases the risk of creating harm.

This is a highly relevant message. As a populace with high rates of obesity, joint destruction, high blood pressure and heart disease, we can ill afford an increase in the use of dangerous pain medications. And opioids arenâ€™t the only hazardous pain medicine.

The risks of Non-Steroidal Anti-Inflammatory Drugs represent a clear and present danger.

The principles of treating pain are no different than any other medical problem. It requires one to consider the balance between risks and benefits. One of the rules of medicine is to avoid making the treatment worse than the disease.