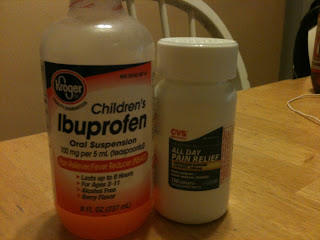 Perhaps now doctors can use this study–in a stretch the truth, the ends justify the means sort of way–to say that NSAIDs may cause the heart to hiccup. Maybe then the patient will say something along these lines, “Heart problems?…That’s it…I surely will stop that medicneâ€¦I never knew it could cause heart problems.”  (Well, we probably shouldn’t get our hopes up too much, as cigarettes, hot dogs and donuts cause heart disease and these toxins have proven hard habits to break.)

4 replies on “Atrial Fibrillation and NSAIDs”

I have rheumatoid arthritis. While my pain isn't severe right now, I always have some pain, somewhere, and inflammation is always there. I don't take any NSAIDs at the moment, but have taken them frequently and at length in the past. For many people with RA they're helpful in battling the pain that comes with the inflammation.

Given this new reason to be concerned about taking NSAIDs, have you any suggestions for alternative therapies? Many of us take these meds knowing the possibility for dangerous, even life-threatening side-effects (DMARDs and biologic for RA come immediately to mind), but without them, we might not be able to function at all. What's one to do?

Thanks for that hard-to-answer question. As in all of medicine it is about the risk/benefit ratio.

The dilemma is that NSAIDs work. They relieve pain, they increase mobility and they do so frequently without direct and immediate downsides. I know this, you know this, and millions others do as well.

The problem is that chronic long-term NSAID use is associated with a price. HTN, GI bleeding and potentially serious CV complications are now well documented. But these same issues are commonly encountered in the immobile. Soâ€¦in severe cases of orthopedic pain flares one has to balance the pros and cons. This is where patient-centered care should be at its best: with an enlightened and non-rushed doctor and educated patient formulating a plan that is mutually agreed upon by both parties.

My point in the post is much more pedestrian than your question requires. That is, that many people believe that common OTC medicines must be innocuous. They are not–not even close. Take two other examples: Cimetidine, a drug fraught with potential drug-drug interactions, and pseudoephedrine, a common cause of arrhythmia and hypertensive crisis are easily available for mass consumption at a patient's whim. Even in this era, many doctors do not appreciate the side effects of many of these presumed innocent remedies.

Such questions on seemingly simple matters–whether to take a NSAID–illustrate the challenges of caring for patients in this era of plenty.

Dr. John, my real concern is the NSAID paediatric drops being prescibed in my jurisdiction.
I have vented over and over to the paediatricians who continue to prescibe diclofinac and NISE (not available in the USA) to children. There clearly needs to be some amplification of the serious side effects of these meds. I have long advised against any meds containing pseudoephedrine.
Dr E Williamson. Jamaica.

Agreed. NSAIDS, taken for any great length of time are bad. This needs more press.