It must be the time change. Sound sleep is eluding me. The good news about waking at 0330 is you can get serious work done. The bad news is doing the (involuntary) nod during a nice lecture on molecular biologic causes of atrial fibrillation this afternoon. I really did want to get that whole intracellular calcium-loading thing nailed down.

I was, however, able to get two posts done today.

Endurance exercise and genes: In the first post, I wrote about an interesting basic science study concerning the potential that endurance exercise has in changing oneâ€™s phenotype. Sorry about the medical speak; phenotype is simply the physical expression of genes (genotype). For instance, blood type A people (phenotype) can have two genotypes: either AA or AO.

What got me interested in a mice study, besides the fact that the researchers swam them senseless for weeks, (think masters swim team days) was that these were special mice. The researchers genetically modified them to have a susceptibility to a common cause of heart muscle disease in the youngâ€”arrhythmogenic right ventricular dysplasia or ARVD. In the non-exercised state, these mice had no obvious disease. In bio-speak, their phenotype was that of normal mice. But when exercised, things changed. The susceptible mice developed changes of ARVD. Itâ€™s as if exercise modified the expression of genes. Thatâ€™s remarkable. The full post is here at theHeart.org.

Role of exercise as therapy for heart failure: In the second post today, I had to give kudos to a Polish group of researchers. It was a small study presented in poster form. The topic addressed a common issue and the conclusions underscored the obvious. (What’s not to like?)

The researchers studied the use of exercise training for patients with advanced heart failure who were not amendable to cardiac resynchronization therapy (CRT). The results showed that prescribed exercise improved VO2, even in these patients with chronic heart failure. The reason this resonates with me is the widespread underuse of exercise-as-medicine. The Polish data is consistent with prior studies. Why doctors donâ€™t use exercise therapy more often surprises me. The full post is here on theHeart.org.

Exciting interview: Another highlight of the day was having coffee with perhaps the most exciting scientist in all of electrophysiology. As analogies go, meeting Dr. Sanjiv Narayan and having him take me through some of his work, is the equivalent of getting cyclocross tips from Sven Nys and Bart Wellens. It has been said that Dr. Narayanâ€™s work in AF ablation â€œstands to turn the AF ablation world upside down.â€ Not only has he come up with a novel technique for ablating AF, but also, in the process, he has helped explain the mechanism of AFâ€”something that has eluded heart rhythm doctors for decades. Look for an update on his work involving Focal Impulse and Rotor Modulation (FIRM) ablation soon. He had six presentations here at EuroPace. A final note on this interview of sorts: Despite his fame, Dr Narayan was as kind and engaging as any scientist I have ever met. Thatâ€™s another thing about his research: heâ€™s enlisted similarly nice people to work with him.

Two dudes from the Midwest: Tomorrow is the first day of the Late-Breaking Clinical trials. My good friend Dr. Jay Schloss (@EJSMD) is presenting. How cool is that? A regular working doctor from Cincinnati Ohio is giving a prestigious late-breaker at a European Heart Rhythm meeting thousands of miles away. And another regular doctor is here to write about it. 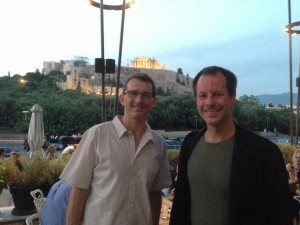 Jay and I had dinner last night at a beautiful restaurant overlooking the Acropolis. Walking back to our hotel through the ancient streets of Athens, I had to shake the cobwebs out of my headâ€¦How is this happening, exactly? Two guys who live 90 miles apart in the middle of America having dinner in the “crucible of human civilization?” (That phrase came from Dr. Narayan’s presentation today.)