This may be the longest I have ever gone between posts. As all bloggers do, I will tell you the reason.

I was preparing for my invited lecture at HRS 2013. It was a Hyde Park Talk. This means you stand in one of the busiest parts of the convention, and just start talking. You have a mic and the more you talk, the more people gather around. It’s different.

My topic was ICDs, goals of care and end-of-life conversations.

Here is the thing that put me under so much pressure: 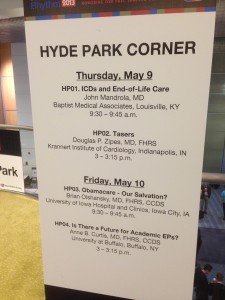 The names on that list are the biggest in the field. These talks are usually (and after mine will probably revert back to being) given by distinguished professors. So why would a non-academic like me get a spot on that podium? I’m not sure exactly, but here is what I surmise: Dr. Rich Fogel, the HRS program director, called me up months ago and said he read one of my posts on theHeart.org about ICD decision making. He wanted someone to speak about the state of the quality of the decision to implant an ICD. He knew the evidence base surrounding doctor-patient communication on sudden death prevention and ICD therapy was bleak. I can’t remember his words exactly, but it was something like, “this stuff needs to be said.”

When I agreed, I had no idea how hard it was going to be to understand a topic so well that you can talk, off the cuff, without PowerPoint, and to your peers.. First, you had the mountains of clinical data in support of the ICD that needed to be critically appraised. Then you had the matter of risk stratification–or said another way: the fact more than 80% of the time we implant an ICD, the patient gets no benefit. Next, was the evidence base on the decision making. Surveys of doctors’ and patients’ perceptions paint a bleak picture. I kept looking for one study that said we did a good job; I found none.

I interviewed experts all over the country. Many of the most published doctors on these topics were generous with their time. That was cool. They helped me find areas of improvement. For instance, at the time of ICD replacement surgery, and the decision to use a CRT-Pacemaker rather than a CRT-Defibrillator, and also, a focus on the ethics and legality of ICD deactivation at end-of-life.

The talk went well. A good crowd showed. I liked the fact a prominent thought leader (who will remain nameless) came up after and berated me for giving a slanted view of the data and being totally wrong about the fact that deactivation of devices at end-of–life was NOT physician-assisted suicide. He felt it was–and our discussion was spirited. I liked that. Of course, I was surrounded by folks, who by their attendance at such a talk, supported my view.

Two people mentioned to me that is was telling that such a talk was given in this format–out in the convention hallway, with no CME. That’s a topic for a blog in the future.

I expect a transcript to come up soon over at theHeart.org.

Here is the link: ICDs, goals of care, and end of life: Difficult conversations (Hyde Park talk at HRS 2013)

Today, I will be presenting in a session on Social Media for the Physician with friends Wes Fisher, Jay Schloss and internet lawyer Bob Coffield.

In regards to your comment about a thought leader thinking deactivating an ICD was physician-assisted suicide: I had a cardiologist tell me that ordering a hospice or pallative medicine consult was the equivalent to first degree murder and we could be arrested for writing that order. I was so shocked I didn’t know how to respond. I was new to the practice and a relatively new PA at the time, so I didn’t debate the issue.
So often I have seen providers want to do everything for every patient, even when it may not be in the patient’s best interest. I think many providers are scared of death and refuse to acknowledge that maybe, sometimes, that is in the best interest of the patient.
Thank you so much for providing this much needed path of discussion.

Well, that’s an interesting forum you were provided for your presentation. I’m glad you attracted an audience and debate. It’s such an important topic.

Thank you for being a leader in the EP community on this topic.

I suspect the “prominent physician” thought about his conversation with you all day. I bet something sunk in.

One of the cool things about social media is the ability to separate the strength of the message from the reputation of the messenger. Everyone can share their ideas, not just those from a few institutions, and the cream rises to the top (RT!).

In the not too distant future, “thought leaders” won’t be able to coast on the strength of a big name institution or on work done much earlier in a career. They will have to consistently re-earn their reputation with the relevance of their message. Important debate will take place out in the open, with the community arbitrating based on the strength of each argument instead of the name behind the keyboard. We will all benefit.

That your message landed you a spot beside the iconic big names is a testament to your efforts here.

Glad you got a chance to speak up on this topic. I wish that “thought leader” who berated you could read Dr. Monica Williams-Murphy’s book, “It’s OK to Die”. She has a wonderful blog by the same name. Info on the book (which is outstanding – and of interest to medical providers as well as non-medical folks) – is available at: http://www.oktodie.com –

Note: I have no affiliation with Dr. Williams-Murphy. I just LOVE her material on this important topic!

What’s more, the percentage of recipients who benefit from ICDs has been greatly exaggerated in most clinical studies by at least two factors: first, the fact that the device itself may cause arrhythmia that it then gets to treat, and secondly – from two major studies in the last year – the fact that if the device is programmed to treat less aggressively, you get far fewer “appropriate” shocks, along with less heart damage and death. Those doctors who pretend every single person who got an “appropriate shock” counts as a “life saved by an ICD”? They’re lying.

Why are more cardiologists not like YOU? Did you just manage somehow to duck being inducted into the religion along with the technical practice? You mention the guy who calls it “physician-assisted suicide” if a patient tries to exercise his legal right to refuse further treatment from a device, then one of your commenters cites a man who considers it murder to allow a patient to think or talk about hospice. It’s only partly because of the facts that I’d advise any of my own family to avoid preventive ICDs, and partly because of the plethora of thugs like these in whose hands one might find oneself at the wrong moment. Is there any way of locating a cardiologist who is not a fanatic, since not everyone can come to Louisville?

Agree that Dr. John is unique – : ) – but there are other good EP physicians out there. My understanding is that it is well established in the EP literature that indications for ICD placement are a moving target – and that the device is not for everyone. It can clearly be life-saving in the right patient who receives the device. But the decision for placement or not of an ICD should be a shared one – and not necessarily a permanent one – since for a variety of reasons, what was initially a “valid indication” for placement may no longer hold true at a later point in time (ie, if the patient’s medical condition, clinical status, or personal wishes for longevity change). KEY would seem to be for the informed patient to establish BEFORE placement with their EP cardiologist that IF at some later point in time they want the device taken out/turned off – that the EP will agree with that decision. If the EP cardiologist will not agree with this decision beforehand – then I’d look for another EP cardiologist who will. But yes – I totally agree that Dr. John’s approach is wonderful, and would be nice if all EPs out there had that same philosophy.

You canNOT get the device taken out. My husband was given an unnecessary pacemaker (twice, due to gross malpractice by the first implanter – long story) and the second implanter promised him an explantation then yanked the rug out from under him. His partners, he claimed, wouldn’t let him do it. I don’t know if that’s because they have faith in the dogma that every patient who gets a device needs a device or because they thought it would be a confession of malpractice. As we discovered, you have no legal right to make a doctor perform surgery. You do have the legal right to make him turn the device down to reduce your harm, though we encountered a nurse who claimed otherwise. So if you were talked into an ICD and now you’d like to get rid of your lifelong endocarditis risk or your 33% risk of tricuspid regurgitation from those nice fat wires … tough luck.

Yes, my husband certainly should have gone back and told the first batch of quacks to take the device out or have us sue their fannies off. I think he now regrets that he didn’t. This option is not available to most implantees, because either the implantation was consistent with standard practice (ignoring the fact that there is never fully informed consent) or the statute of limitations is long since up. Unless you have massive legal leverage to employ, I do not see you ever getting an elective explantation – even if you really need it. My husband’s second implanter was asked about the tricuspid valve damage issue and responded with deliberate ignorance or lies. If my husband were ever to have another echo – which will not happen! – and to be found with severe TR, I am sure that guy would be happy to bull him into going for valve surgery while leaving the pacemaker in him.

Thanks for speaking on such important topic and making it through the stress of it. Keep up the good work!