I know the title sounds crazy, but this isnâ€™t just a headline grabber. It is real. 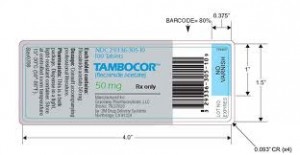 Tambocor is the brand name version of the helpful AF drug, flecainide. â€œFlec,â€ as we call it, helps control AF episodes in patients with atrial fibrillation (AF) AND a structurally normal heart.

Its patent long expired; most AF patients take and get along fine on generic flecainide. A handful of patients, however, have seemed to do better with Tambocor. Itâ€™s hard to explain because the drugs appear equivalent on paper. But itâ€™s also well established that medicines impact people differently. Call this a rule of medicine.

Recently, it has been brought to my attention that brand-name Tambocor is no longer available. Poof, itâ€™s gone. A patient tells me that Walgreens wiped it from its list.

Why would this be? And how do genital warts and bankruptcy figure in the story?

The old doctor in me said, â€œOkay, Tambocor is no longer around, letâ€™s get on with other plans: tolerate generics, change meds or reassess the need for medicine.â€ The blogger in me wanted to understand why a useful drug just went poof.

In a couple of hours, with the help of an enterprising associate, Google and a link that a patient emailed to me, I found some leads.

My memory had Tambocor being made by 3M pharmaceuticals. This was true, until 2006, when Graceway Pharmaceuticals bought the 3M Coâ€™s pharmaceutical division. In this venture, Graceway wasnâ€™t interested in an AF drug that had a preferred lower-priced generic. They were after 3Mâ€™s gems: dermatology creams used in the treatment of HPV-related genital warts and inhaled meds for asthma.

And it looks like Medicisâ€™ plans for Tambocor are murky. From an associate looking into the matter at my request:

I called and spoke with a Medicis representative who said that they are waiting on information from the FDA and do not have a release date for Tambocor at this time.

So that’s it. No profits, no medicines.

Reminds of the jingle in the Big Yellow Taxi tune:

Don’t it always seem to go,
That you don’t know what you’ve got
Til its gone

P.S. For the AF readers affected: My experience with the Tambocor v. flecainide issue is that the great majority of patients do fine with generic flecainide. When I needed chemical cardioversion of AF, I took flecainide. It worked. I know of no studies suggesting Tambocor performs better than generic flecainide. All I have are rare anecdotes in selected patients. That’s not much of an evidence base.Â

My mother’s rheumatoid arthritis symptoms were helped for years by the inexpensive and old drug tetracycline — and it became no longer available as of about a month ago. Same situation, and no working substitute for her.