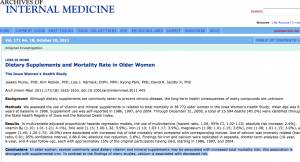 Vitamins were in the news this week. It turns out that older woman (in the Iowa womenâ€™s study) who reported taking vitamins had a slightly higher chance of dying. The authors concluded:

What do I think?

Itâ€™s only a look-back association trial with self-reported vitamin use. The researchers studied only older women. And the absolute numbers show only small differences in risk. In no way does this trial prove that vitamins cause death.

But based on prior outcomes studies with dietary supplements, the notion that taking extra nutrients–in pill form–will enhance our health does not look good. Take this sobering report from a few years ago on the lack of benefit of anti-oxidant supplements for heart disease:

In the HDL-Atherosclerosis Treatment Study (NEJM), subjects with demonstrated coronary artery disease on simvastatin/niacin and an antioxidant cocktail (vitamin E, Î²-carotene, vitamin C, and selenium) had a 0.7% progression in blockage after 3 years, compared with 0.4% regression in the group on only simvastatin/niacin. One theory held that the anti-oxidants may have inhibited the benefits of the statin-niacin combination.

Based on this trial and many like it, the AHA does not support the use of anti-oxidants for the prevention of heart disease.

Americans take a lot of vitamins and supplements. We put a lot of hope into easy solutions. Vitamin and supplement makers are skilled at spinning test-tube effects of supplements (think telomeres) into positive outcomes. As we say in the cycling world when another cyclist is up the road, â€œthatâ€™s a long bridge.â€

I get it though. We would like to think that supplements can replace poor eating habits; or help prevent Cancer and heart disease; or the most tempting of all: make us run faster, jump higher and of course pedal more watts.

I too, fell prey to the clever ads suggesting that taking a capsule containing a Tibetian Fungi, a Russian Root and some special “ATP complex” would make me ride like Lance and the boys. Nope, it didnâ€™t happen. I remained pretty fast, but not that fast. Imagine?

Some day I may be proven wrong, but not yet. Health comes not from a pill. It comes fromâ€¦

One reply on “CW: If good nutrients are delivered in pill form, are they still good?”

To quote someone who is master of the obvious, “You can’t make a well person weller”