Here is the pdf version: 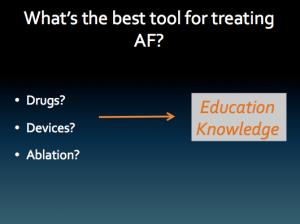 And the power point version:

—We will start with the accepted evidence base for warfarin.

—Then move to dispel four myths about using blood-thinners in AF:

—Next up is this question:

—What is the role of dabigatran?

—A peek at the most promising stroke prevention strategy in the near future: