A number of patients, and a couple of cyclists, have recently asked me about the worthiness of omega-3 supplements.

And there it was today when I checked the mail: a comprehensive review article on n-3 Fatty Acids in Cardiovascular Disease, in this week’s New England Journal of Medicine.

I am far from a nutritionist or a biochemistâ€”though I did get an A+ in first year biochemistry in medical school. That was before realizing that, at UCONN in the 1980s, an A+ was equal to ‘P,’ for pass.

Here is what I have learned so far about the essential fatty acids.

Like water, oxygen and many vitamins, omega-3 (n-3) and omega-6 (n-6) fatty acids are called essential fatty acids because they cannot be made by our bodies. We must ingest them. Essential fatty acids are used in the body for biological processes, like blood clotting, building cell membranes in the brain, and controlling the effects of inflammation, rather than for fuel.

We eat two major classes of omega-3 (n-3) fatty acids. ALA (alpha-linolenic acid) comes primarily from vegetable oils (soybean, rapeseed, and flax-seed), and walnuts. ALA is also found in tasty green vegetables like Brussels sprouts, kale and spinach. The second form of essential omega-3s are called EPA (eicosapentaenoic acid) and DHA (docosahexaenoic acid). We get them from eating the fatty fishesâ€”sardines, mackerel, salmon and tuna, or by taking supplements. 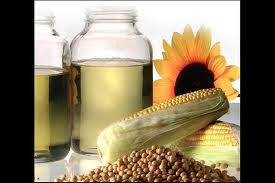 The primary omega-6 is called linoleic acid (LA), and it is abundant in the western diet because of its presence in poultry, eggs, corn oil and soybean oils. Omega 6 (n-6) fatty acids are also considered beneficial fatty acids, though there is some debate on the appropriate ratio of n-6 to n-3 intake. Some think that n-3 fatty acids are less inflammatory, and more heart-healthy than n-6, but others claim that little scientific data exist to make this claim. One Harvard nutrition expert said it this way:

â€¦”the omega-3 to omega-6 ratio is basically the “good divided by the good,” so it is of no value in evaluating diet quality or predicting disease.”

The legend that fatty acids may promote health by controlling inflammation comes from 1960s-vintage studies of Eskimos. When compared to Danish subjects, Inuit Eskimos, from Greenland, showed remarkably low rates of both heart disease and inflammatory/auto-immune diseases. The obvious explanation here centered on the Eskimo diet which was high in seal and whales–excellent sources of marine n-3 fatty acids.

That was then; now things are different for the Inuit.

Sadly, this Canadian Geographic report chronicles the recent decline of Inuit health. Like Native Americans, the Inuits are now suffering from a significant rise in diabetes, obesity and heart disease. All this un-health parallels the expansion of western health habits. It seems the native Inuit were much healthier when they hunted and ate whales, than they are driving to the grocery for pop-tarts, beer and chips.

That’s all for part I.

In Part II, I will explore three more topics:

The biology of essential fatty acids: How might the beneficial fats prove beneficial?

Do the scientific trials of fatty acids prove any real heart-related benefit?

A final stance on whether I would recommend fatty acid supplements.

P.S. On the whole Part I-II thing: the truth of the matter is that I am tired, it’s late, and sleep is the third component of health. So good night. Look for part II next Wed.