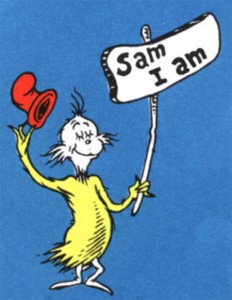 He is 19 years old, a college sophomore-to-be, who sadly plans to study chemistry–more on that later. He looked happy and rested; he kept his cellphone in his locker the entire day; and while dressed in too large scrubs, a crooked surgical cap and a floral-patterned protective lead vest, he looked younger than his stated age.

Sam had asked to shadow me for a day. The purpose was to explore his options for that rapidly-approaching and fateful day: career day. Which box will Sam check?

Before telling you some of the details of the day, let me tell you how much pressure I feel on shadow days. College kids, off the summer, often ask to shadow doctors so they can feel the experience of medical practice. Should they, or shouldnâ€™t they check the medicine box on career day. Now there is an important check box!

The pressure I feel comes from my concern for the future of healthcare. I worry that the take-the-fun-out-of-medicine people are discouraging youngers like Sam. I want to show them the beautiful moments of Medicine.

Our day started with a bang. After meeting the first ablation patient in the holding area, and doing the requisite mountain of paperwork (shh, I did it without a peep), we moved on to a patient on the heart floor.

Before Sam saw any blood, catheters, GPS-systems, banks of computers and radio-frequency generators, he got to see me meander through the forest of patient-centered care. He heard me explain the risks of sudden cardiac death versus the risks of an implantable defibrillator. He got to see the look on the patientâ€™s face when she heard me speak of the risk of dying suddenly. A look that said, â€œHey, no one said that my heart attack could lead to death.â€ Sam heard me try to explain the counter-intuitive notion that because she was feeling well was all the more reason to consider an ICD.

Beep, Beep, EP lab is ready, came the next text.

The AF ablation went well. I showed him our nifty tools and what we do. More impressive than the all the physics and biology, however, were the people of the EP lab. He met the anesthesiologist, who happened to be a highly talented and experienced nurse anesthetistâ€”one that could look after me any day. He met the EP lab nurses and the x-ray techs that help me map the heart, and burn in the right places. â€œHow do they know so much?â€ his expression said.

Sam also met the industry people that support us. You know, the folks that some want to vilify, as (former) logoâ€™d-pen givers that â€œinfluenceâ€ doctors to use their expensive products. But what Sam saw were technically gifted folks that were able to trouble-shoot equipment which could be called just a tad over-engineered. He saw useful industry people that were adding to patient care.

By the third ablation, Sam was getting the hang of what we do in the EP lab. So when one of my interventional partners came in to chide us for drinking coffee during the â€œholding patternâ€â€”a time when we wait to see whether our burns have held back the electrical impulsesâ€”I told Sam to go next door and see some plumbing.

In the cath-lab suite, Sam heard about how interventional cardiologists get to save lives by squishing, sucking and propping open arteries in the heart. â€œWhat arteries?” Sam asked. Then his eyes bulged open when he saw the Sâ€™s of the contrast-filled coronary arteries. A wow moment for sure. Less than an hour later, in the recovery area, Sam saw the future of heart catheterizationâ€”the same patient that just had a radial-artery approach to cath was sitting upright, chomping a sandwich and getting ready to amble out to her car with only a small bandage on the wrist. (The radial-artery approach to heart catheterization will likely make the old approach through the leg, look very rotary-phone-ish.)

Over lunch, in the doctorâ€™s lounge, Sam met more of the people of medicine: a nurse whose job it was to take care of a group of doctorsâ€”not patients. Now we all know that, as a general rule, nurses are remarkable people, but the few capable of managing doctors are very very special people indeed. He met a smiling pulmonologist who has practiced medicine for nearly forty years; one who still wears a suit and boasts that he does not own a cell phoneâ€”not even a flip phone. While I was tweeting something, he told Sam that doctoring has been wonderful to him, and he was going to keep helping people as long as he had the strength. Next, Sam met the friendliest doctor on our staffâ€”an emergency room specialist. He learned that ER docs see about a dozen patients at a time. I offered that just walking through the ERâ€”with its bright lights, incessant beeps, piercing speakers, and noises of human illness, like cough, retching, etcâ€”is enough to give me palpitations. When I am forced down to the ER, the Aspergian portions of my brain want to say…Shhhhhh…please!

Before being released to my bike, I had just one more patient to see. He was a man that I have known for nearly a decade. He is now old and much more frail, but yet he still gets around the neighborhood. His heart problem was just a little hiccup of electricity; it was nothing too serious. But that expanding thing, that terrible pain; now that was another matter. He had only two choices: heaven or the operating room, and then the long bumpy road through the ICU and rehab. Sam saw that all I could offer this man was to grab both his hands, look him in the eye and wish him the best of luck. â€œPray for me,â€ he requested.

â€œOkayâ€¦I will ask her to look after you,â€ I offered.

Itâ€™s the people of medicine,

the words of medicine,

the hand holding intermixed with the catheter navigation,

All of this. Indeed, all of this surely beats a cubicle.

As he left for the day, Sam thanked me. But it is I who needed to thank him.

For in showing him, I got to see.

PS: I offered Sam one last noogget of advice: consider studying liberal arts and humanities. Such will make you a better blogger.