How about those twenty-year-olds from the new fitness, health and happiness network, the Greatist?

Just because twenty-somethings gave us Facebook and Apple, do these youngers really think they can affect heart disease more than us fancy doctors?Â  We are the experts. 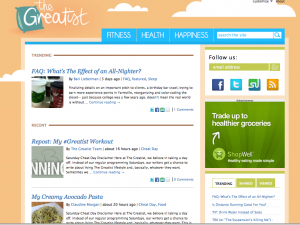 They didn’t go to medical school, (though at least one graduated from Harvard.)

They don’t use stethoscopes; wait, that’s a bad example, stethoscopes really don’t do much.

They don’t know how to squish a blockage that’s causing a heart attack.

And, they surely wouldn’t be able to correctly apply one of the 700,000 CPT codes to a patient encounter.

So what do they have that’s going to impact heart disease?

They are twenty-somethings with an idea on bettering people’s lives. They boldly think that publishing high-quality, verified fitness and health information might impact people to make better lifestyle choices. Specifically, they aim to “inspire and inform people to make at least one healthier decision per week.,” They reason that these small choices may add up to big results.

They admit to aiming high, and anyone who lives outside San Luis Obispo or Boulder Co. can see they are right about “…shooting for freakin’ Jupiter.”

But before you dismiss the Greatist as another dreamy concoction from a group of photogenic and idealistic twenty-year-olds (check those pictures on the ‘about’ tab), I would suggest that their notion holds real promise.

Something I’d bet my favorite bike on is that heart disease will remain our leading killer until there’s a sea-change in the choices people make concerning their health. The slickness of our tools will not outrun the epidemic of making inflammatory lifestyle choices–not moving, eating too much, and sleeping too little. Yes, it really is that simple.

Prevention holds the real promise of tipping heart disease. But of course hip youngers don’t use gentrified words like prevention; they call it being the greatist you.

Though they make me grin, they are onto something real.

Knocking heart disease down the ladder of leading killers won’t come from novel pills, absorbable stents, or fancier ablation catheters. I’d submit to you that not even stem cells hold that kind of promiseâ€”at least not in my lifetime.

All this is why I think the Greatist is worth a look, or a tweet, or a like.

Good for them for trying. Maybe being the “greatist you” will become like wearing hush puppies–hip and cool. And keep in mind, heart-healthy choices also impact Cancer, diabetes, and a host of other diseases that are very expensive to treat and cheap to prevent.

I wish them well.

One reply on “Could twenty-somethings “tip” heart disease?”