Normally, on Wednesdays, I try to mesh cycling and health.Â  Today, the gumbo includes cycling, politics, irony, and of course, heart-health.

I’ve said before that most of the cyclists and endurance athletes I know ride expensive bikes, wear costly clothes and measure their meager power outputs with thousand-dollar, truth-telling strain gauges.Â  Though we may moan and groan about thirty-dollar race fees, the bottom line is that most present-day competitive cyclists are well-off.Â  Except for a few pale-skinned, pony-tailed anomalies, we call ourselves, Republicans.

It’s our money, we earned it. Republican cyclists despise taxes, government hand-outs and some even think slackers could be cured if they got up earlier and tried harder. 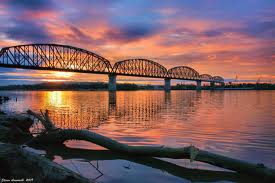 That kind of conservative logic is hard to jive with the irony of how much cyclists depend on government-funded infrastructure.Â  Our road bikes roll best on smoothly paved roads, and our mountain bikes require groomed trails.Â  For cities separated by waterways, like the Ohio River in Louisville, we need suitable bridges. Hello, bikes can’t ride on water.

Today, in Louisville, the Federal Highway Administration (tax-dollars) provided the necessary multi-million dollar “boost” to complete the conversion of an abandoned railway bridge across the Ohio.Â  Completing the Big Four Bridge is great news for those of us who pedal, walk or run around our community.Â  In 2013, cyclists will have a safe and leisurely way to cross the Ohio River.

Before today’s news, the abandoned bridge stood as a monument of government ineptness. The bridge exuded goofiness. While the KY side boasted a politically-correct, shallow-pitched, gleaming ramp that costs millions, the IN side featured a 50-foot sheer drop to the sidewalk.Â  It was a useless hunk of iron–like a surgeon without instruments, or an EP-doctor without an ablation catheter.

But now, thanks to tax dollars, the bridge to nowhere will shine as a beacon to health.Â  Hearts, lungs and muscles will be the only engines allowed on this bridge.

It’s far from ironic that cities most friendly to cycling score high in heart healthâ€”places like Minneapolis, Boston and Seattle.

Don’t worry though, I understand the understand the problems that arise when government spends more money than it has; I watch the NewsHour.Â  But perhaps, a better way to consider projects like pedestrian bridges are as healthcare spending.Â  That way, deficit spending is allowed.

We will ride it.

Who knows, it may prove more cost-effective than stents and defibrillators.

Now, how much do I owe in April?