Our Ohio valley cyclocross season isn’t over yet, but there are two outs in the ninth. This weekend, the site of the final act is Indianapolis IN.

The short, cold and cloudy days of December mesh with the fatigue of year-long competition to deplete one of any remaining remnants of caring. Like 4 AM felt the morning of a big test–there is no more that can be learned, “bring it on professor.” 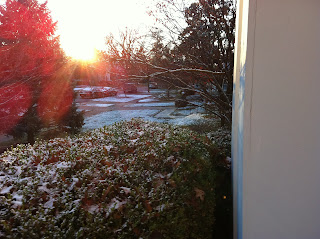 Morning sunrises may look sweet while sipping coffee from the front step of a warm house, but this tingle fades rapidly out there on a bike. Sorry, hard-arses, I’ll take Laguna Beach weather anytime.

It’s sad, and OK at the same time.  The snow signals a time for new stuff: new books, new websites and a new job.

Although my riding this year was way less than what I had hoped for, it was by far my favorite season of CX racing.

How could that be?

Because bike racing is different now. Before mom and son started racing my results mattered a whole bunch more. However, as there are no other CX-racing cardiologists, just 35+ year-old cycling androids, not worrying about personal goals is a good thing.

This fall, after having watched a wife and teenage son race so successfully, it was frequently said to me during my most serious ‘elite-race’ preparation ritual, “the pressure’s on, both Mandrola’s have already won.”

But in reality the opposite was true. After watching family race, the elite masters raceâ€”in which mostly well-off middle-agers race for 40 dollar checks–felt like a depressingly small after-dinner mint.  True, forty dollars is nice, but mom and son had already procured more useful treasures, like beer mugs, socks or a tee-shirt (for a new-t-quilt.)

Don’t misunderstand though, it’s impossible to race a bike in a completely care-free state. Because without care there would be no need for safety pins, numbers and warming gels.

So, even though, at this moment, the carnival means more than the single roller-coaster, I know bike racing still excites me. How? Because of hope. Hope for a better year next year. It will be better.  Surely.   In this way bike racers are like baseball players at spring training camp. Thoughts of better preparation next year pass involuntarily through a bike-racer’s frontal lobe.  In bike-racing, hope is a mandatory reflex.